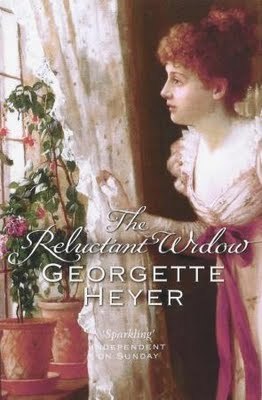 This was published in 1946, a fairly classic Heyer, with a most intriguing plot. Elinor Rochdale, a young woman of good birth but straitened circumstances, sets out to accept a position as a governess. When she inadvertently steps into the wrong carriage at the coach stop, she finds herself conveyed to the estate of one Ned Carlyon. Carlyon believes Elinor to be the young woman he hired to marry his dying cousin, Eustace Cheviot, in order to avoid inheriting Cheviot’s estate himself. Somehow, Elinor is talked into marrying Eustace on his deathbed and thus becomes a widow almost as soon as the ring is on her finger. And from there onwards, the plot descends rather rapidly into a whirl of housebreakers, secret passages, uninvited guests, murder, missing government papers, and a dog named Bouncer.

As a traditional Regency romp, this is rather good. The misunderstandings, adventures and tangled web of mysteries keep things bowling along at a merry pace, and Carlyon’s younger brother, Nicky, and Bouncer the dog steal the show. The romance is the usual unsatisfactory Heyer variant, two people who are obviously destined for each other but show virtually no inclination in that direction until the last chapter. I suppose the heroine could be said to display a softening attitude towards the hero, as her indignant expostulations gradually become more perfunctory, but the hero never seemed to change in tone at all. Only a comment by his sister suggests that there is something going on, so that the ending comes as less of a shock.

This was a very wordy book, and the lady’s protestations at the high-handedness of Carlyon became quite tedious after a while. However, that was the style of the era, and in other respects the book is a good, solid read. Both the main characters were believable and sensible, which makes a change. I’m wavering between three and four stars, but I’ll be generous and go for four stars.