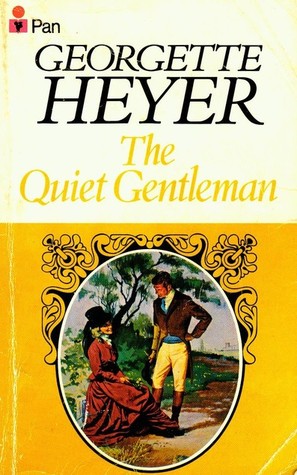 This is a curious one, #10 in my reread of all Heyer’s Regency romances, written in 1951. After the delights of Arabella, and a charmingly developed romance, this is a return to the perfunctory love affair, quite overshadowed by the needs of the plot. And instead of the usual near-farcical Regency romp, implausible but always entertaining, Heyer veers into murder mystery territory.

The story revolves around Gervase Frant, the Earl of St Erth, who returns after many years to claim his family seat at Stanyon. He finds his step-mother and half-brother, Martin, less than welcoming. His long absence and a spell in the army at Waterloo have encouraged them to believe that Martin will ultimately inherit, and Gervase’s return is an unpleasant surprise. Only cousin Theo, who manages the estate, is friendly. So when it appears that someone is trying to kill Gervase, suspicion naturally falls on spoilt, impulsive Martin.

The hero and heroine in this one, Gervase and the delightfully down-to-earth Miss Morville, never really get much opportunity to develop their relationship until the very last moment. In fact, for the first half of the book, Gervase is cheerfully paying court to the beautiful and lively young daughter of the rich but not terribly well-bred neighbours. I rather disapproved of his behaviour, actually. A man of his position and age, presumed to be in the market for a wife, might well have aroused expectations in the young lady. Common sense might have suggested keeping more of a distance. But that would have spoiled the story rather.

The mystery part of the plot failed to create much tension, since the identity of the perpetrator was blindingly obvious almost from the start. Again, I disapproved of Gervase’s behaviour in the way he resolved the issue, but I can see the reasoning behind it. A fairly melodramatic ending finally brings our two lovers together and all is well. Despite the weaknesses in the plot and my usual grumble about the overshadowed romance, this was another highly enjoyable read. Five stars.

One response to “Review: ‘The Quiet Gentleman’ by Georgette Heyer”