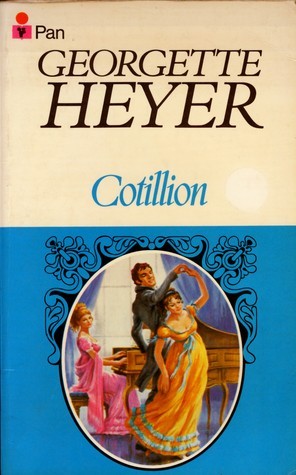 The run of five star reviews is getting longer. Here’s another classic, #11 in my complete reread of the author’s Regency romances, and this is the fifth five star in succession. Yet I can’t give it less, not when I enjoyed it so much. This is absolutely vintage Heyer, with perhaps my favourite hero so far, a spirited and self-assured heroine, a wonderful sub-plot and a very credible romance, for once.

This book, first published in 1953, starts with an outrageous arrangement: wealthy Mr Penicuik decides to leave his considerable fortune to whichever of his nephews marries his adopted daughter Kitty. Two turn up – the rather pompous clergyman and the not-quite-all-there Earl. Kitty composedly turns them down. But when dandy-about-town Freddy Standen arrives, not quite understanding what is happening, and, when he does, immediately ready to turn tail and run away, Kitty persuades him into a fake betrothal so that she can get herself up to town. Because there’s yet another cousin, Jack, the handsome rake…

And so begins this wonderful tale. What I love most about it is that although in some respects it falls into the traditional Heyer mould of an older man-about-town and a young ingenue, Kitty isn’t at all a helpless young thing, and Freddy isn’t the usual world-weary rake. He’s just a very, very nice man who would never, ever do anything improper, and is clearly far better husband material than the arrogant Jack, so sure of Kitty that he makes no attempt to win her until it’s too late. Jack isn’t really a villain, and in a great many Regencies he would be the hero, but Freddy is truly the hero of this one, and every bit the perfect gentleman.

I mentioned the sub-plot, which involves Dolphinton, the dim-witted Earl, who is so terrified of his mother that he hides under the table! He’s meant as the comic relief, but it’s hard not to like him and his most implausible paramour. The real comedy came from Freddy, who gallantly squires Kitty all over town to the many sights she is determined to see. As an aside, quite my favourite character after Freddy himself was his father, Lord Legerton, who is as astute and sardonic as Freddy is slow-on-the-uptake and straightforward. Their conversations were delightful.

I have been grumbling all the way through my rereads about the romance element being forgotten about until the very last moment, but not so here. The relationship develops slowly but surely, and the ending brought everything to a head and resolved matters most satisfactorily. Five stars.