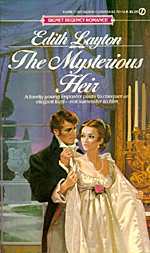 I got off on completely the wrong foot with this one, a 1984 book which is part of my birthday Regency list. The very first scene introduces the reader to a curmudgeonly gentleman, sitting huddled beside the fire with his very much needed walking stick, massaging his gammy leg (an old war wound) and railing at the rain. Naturally I assumed he was a very elderly gentleman, and took the young man, fair of form and face, who bounds in later, as the hero. Not so. The curmudgeon turns out to be thirty or so, an earl and indisputably the hero.

Then I was tripped up by the Earl having to meet three prospective heirs and choose one from amongst them. Excuse me? On what planet did any titled Regency gent get to choose his heir? He might leave his property where he liked (if it wasn’t entailed), but the title followed very strict rules. So I was struggling in the early chapters with both misdirection and historical blunders.

Neither of the main characters really grabbed me by the throat, so to speak. The Earl continues to act the curmudgeon for most of the book, and in his dealings with Elizabeth, the heroine, there’s an edge almost of violence sometimes, that really made me dislike him. He also treats her with unspeakable cruelty at the end, and no, not telling her what’s going on ‘for her own good’ is not an acceptable excuse. And she’s an idiot sometimes, but she probably had more of an excuse than he did.

However, there’s a lot to like about this book. There’s plenty of humour, there are some delightful minor characters, like Bev, the gay friend of the Earl, Anthony, one of the heirs, who is a huge fan of Napoleon, and another heir, Owen, a podgy foodaholic. The writing is excellent and the plot unfolded at a stately but enjoyable pace. The villains are idiotically obvious, but subtlety isn’t a prerequisite for this kind of book.

What saved everything for me was the development of the romance, which blossoms very, very slowly over the whole course of the book. I’m a sucker for a believable romance, and the author is skillful enough to infuse the whole thing with romantic fairydust which, in the end, outweighed the less likable aspects of their characters. And there was enough tension in some of the hero and heroine’s scenes to keep me avidly turning the pages. Four stars.

NEW! A brand new 6-book Strangers series. Sign up to my mailing list to receive the FREE prequel novella. Books 1 and 2 are out now, and books 3 and 4 are available to pre-order.