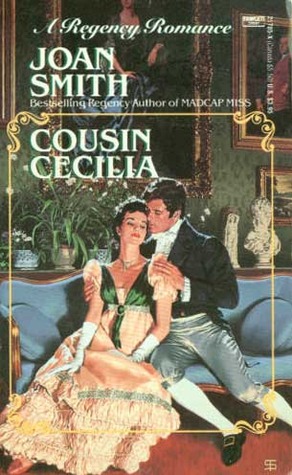 This is a lovely traditional Regency, focused on social niceties and marriage prospects and not much else. Anyone looking for high action or sex scenes or intrigue should look elsewhere. But for anyone who’s a fan of Georgette Heyer, this is a good substitute.

The premise is that the heroine, the eponymous Cecilia, is unmarried herself but an expert matchmaker, brought in to ensure that her cousins’ suitors get to the point of a declaration. She finds they’ve been led astray by recently returned widower Lord Wickham, so she sets out to charm him in order to arrange matters to her satisfaction. So far so good, and of course it’s no surprise that the initial flirtation between the two turns to something else.

With all Regencies of this type, there are two aspects that both have to work well for the book to be an overall success. One is the romp element, the side plots and minor characters and mishaps that drive the story forward, provide the amusement and throw the main characters into increasingly difficult encounters. This side of the story is fairly lightweight, but the characters are well-sketched and the mishaps are suitably entertaining. Cecilia’s efforts to bring her three provincial charges to a proper degree of self-esteem are nicely done, and I liked that the girls tended to lapse as soon as her back was turned. I liked, too, the very confined setting. Although the book ends up in London at the height of the season, most of it is set in one small town, and this aspect reminded me of Pride and Prejudice.

The romance is quite nicely developed, a slow-burn rather than insta-love or (worse) nothing at all until the last chapter. But here we see how a society flirtation gradually deepens and turns to serious love. However, I had a real problem with the character of Lord Wickham. He’s framed at the start as the villain of the piece, a worldly and dissolute man who leads the young suitors of the cousins by taking them to gambling dens and entertaining them to drunken parties at his home. He’s a very aloof, unfriendly man, we’re told, who never socialises and is rarely seen.

And naturally, the first time our heroine ventures out of the house, who should she bump into but this reclusive man, walking about town like anyone else, and perfectly willing to be sociable and charming, and even requesting permission to call upon her the next day. Just like any regular fellow. This pattern is repeated endlessly. Far from being a dissolute man leading the youngsters astray, he turns out to be a quiet and well educated, not to say learned, man, and it’s not really clear to me why he ever had a bad reputation. This is a theme of quite a few Regencies, in fact, that the supposed rake or black sheep turns out to be perfectly respectable after all.

And so the romance gets under way, and, given that both parties are intelligent, articulate people of independent means and both free to marry, it becomes increasingly difficult to contrive reasons why they shouldn’t progress smoothly to the altar. So the author falls back on the time-honoured strategy – the misunderstanding. He thinks she’s looking only for a practical marriage of convenience. She’s insulted by his unromantic proposal. And then they go to London and things get very silly indeed. I know Regencies are required to have a degree of silliness, with the two lovers at cross-purposes, but this was far too long-drawn-out for my taste.

However, overall the story was an enjoyable traditional Regency, historically sound and with characters who were believably of the era. I thoroughly enjoyed it, and only the above-mentioned flakiness in the plot keeps it to fours stars.

NEW! A brand new 6-book Strangers series. Sign up to my mailing list to receive the FREE prequel novella. Books 1 and 2 are out now, and books 3 and 4 are available to pre-order.