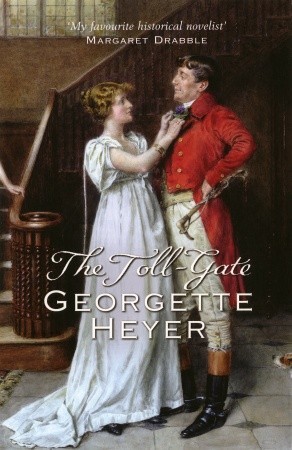 I started this book twice. The first time, I was put off by the vast number of names and intertwined relationships. The second time, determined to learn them all, I still got befuddled. And you know what? After the first chapter, none of them are ever seen again! That is so irritating.

This is part of my reread of all Heyer’s Regency romances, in chronological order. Oddly enough, this is the first one not to ring any bells with me, so I think I must have missed it before. The premise – John Staple, former captain of the Dragoons, takes a wrong turn while going to visit a friend. Finding himself at a toll-gate, manned only by a boy whose father has disappeared under odd circumstances, he stays to uncover the mystery. And for another, more personal, reason.

One of my biggest complaints about Heyer is that the romance tends to get buried by the twists and turns of the plot, only to suddenly reappear in the last chapter. Not so here, for it forms the centre of the unlikely chain of events that unfolds, and for once is the least implausible part of the story. I liked both the main characters, and if their love is more bolt-from-the-blue than slow-burn, it felt realistic for two people old enough to know their own minds.

My other big complaint about Heyer is the amount of Regency cant she likes to use. When it’s just a couple of characters, it’s not too bad, but here almost everybody uses it liberally and it drove me nuts. It’s a dreadful distraction, and (frankly) the worst kind of well-researched showing off.

The ending is pretty silly, but also unsettling in some ways. But then it was written in 1954 so I suppose sensibilities were different then. Four stars.