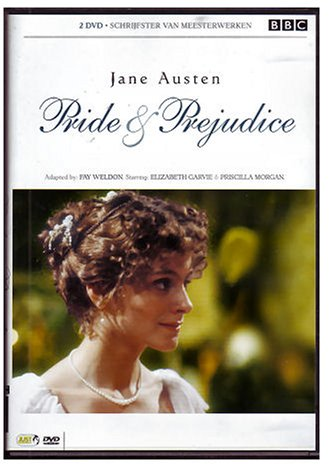 A lot of reviews praise this version for its fresh feel, but I found it very stilted, and actually disliked it pretty strongly. Elizabeth was flat, Darcy was stiff and arrogant almost all the way through, Mr Bennet was unpleasant, Mrs Bennet was… oh, actually, she was all right. Lady Catherine was good, too, but you have to be pretty ham-fisted to get that wrong, and she was the right age for the mother of an unmarried daughter. And hallelujah for a version which actually does something with Anne de Burgh, and makes her into a sympathetic character. Mr Collins was not funny enough. In fact the whole production largely lost its wit.

And that was, perhaps, the biggest problem with Elizabeth. In the book she’s lively, irreverent, quick-witted and very, very funny. As portrayed here, there’s nothing funny about her at all. She reads her lines as if she’s struggling with the antiquated language, and then she smiles all the time to lighten the tone. It makes her seem like the sort of sweet, simpering miss that’s the very antithesis of the real Elizabeth!

Darcy had only one facial expression all the way through until the final scene. It was very, very hard to see what any woman would find attractive about him. One scene in particular summarises the way his character is portrayed. After he gives Elizabeth her letter, he is seen walked steadily away from her…and away and away and away… the whole time she reads, he never varies his pace or direction. Yet this is the defining moment in the book for Darcy. He’s proposed and been rejected in the most brutal fashion, and been forced to re-evaluate his conduct and explain himself to her. He is in the process of a major change of character, yet the scene says exactly the opposite, that he remains unswerving in his manner and methods. Completely, utterly wrong.

The camera work is of the era, I suppose, and the costumes the same – almost right, but not quite. And all the men seemed to dress the same, with no distinction of rank. Only Lady Catherine had the properly aristocratic elaborate costume. And I did wonder what happened to the Bennet sisters’ dresses at the end, when they changed style quite abruptly, as if a different designer was called in at the last minute. The script used quite a lot of the author’s original words, even from the narration, but then used them in the wrong place or put them in the mouths of the wrong characters, which had a strangely jarring effect.

A dreadful piece of work, and not recommended at all, except for completists.