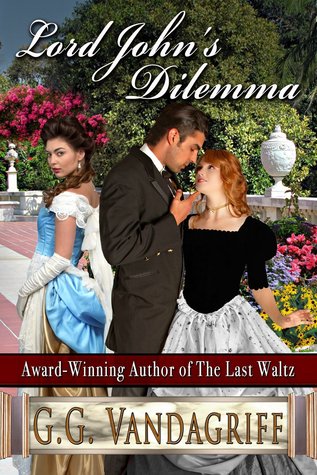 This is one of those books that is perfectly readable, without ever setting the world on fire. There’s nothing too terrible about it, but also nothing to render it particularly memorable, either. It’s just a pleasant read, and there’s nothing at all wrong with that.

The Lord John of the title is a younger son returning from Waterloo wounded and battle-weary. The book describes it as melancholia, which we would now call depression or (in this case) PTSD, but I liked the use of the old-fashioned term. He’s set his mind on marrying the daughter of the pushy neighbours, a lovely girl who’s eminently suitable and rich, and is also conveniently in love with him. Unfortunately, he keeps getting distracted by the neighbours’ new governess, who needs rescuing at regular intervals (by our hero, naturally), but is also not what she seems. This sets up a nicely arranged mix of characters, as well as the dilemma of the title.

The writing is rather good, although there are Americanisms a-plenty (off of, for instance, and fall instead of autumn). Also, although the scene of waltzing in the field of yellow daisies is wonderful and romantic and beautifully evocative, I have no idea what sort of yellow daisies might be growing in the English countryside. Bit of a puzzle, that (I suspect they’re meant to be sunflowers). This book also supports my hypothesis that no American author ever really gets to grips with the British peerage. Our hero is the younger son of an earl, and therefore would not be called Lord John at all (he’d be the Honourable Mr John Whatever). However, these are minor quibbles which never interfered with my enjoyment of the book, and both the story and the characters are nicely done.

Things go off the boil at the end, with an improbable rival for the heroine’s hand, and a dependence on an impausibility, but nevertheless, it rated four stars.