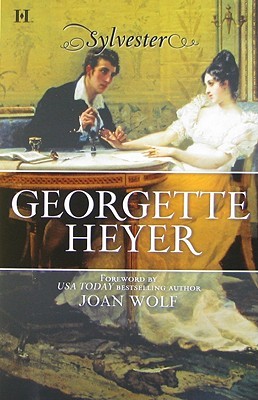 This was published the same year as April Lady, and is so much the better of the two that it’s untrue. The hero is a seemingly perfect gentleman, not a cynical, world-weary older man, and his only flaw is a tendency to arrogance. But then he is a duke, so perhaps that’s unavoidable. The heroine is a bright, independent-minded young lady, quite young (as Heyer’s heroines tend to be) but not at all the silly ingenue.

The premise is that our hero, Sylvester, has decided to get married. He has a shortlist of eligible females, but his godmother bounces him into considering another (our heroine, Phoebe). She’s only met him briefly, but found him cold and reserved. She’s written a novel and made him, thinly disguised, into the villain. And when she hears he’s coming to the family home to offer for her, she’s so horrified that she runs away.

This sets in train all sorts of Heyer-esque misadventures and misunderstandings, including an enforced stay in an inn, where Sylvester plays the hero rather than the villain, and both hero and heroine discover that the other is not as bad as rumour painted them. But when the novel is published and Sylvester learns that Phoebe has made him a laughing stock, things get very sticky.

The scenes between Sylvester and Phoebe shine, but there are also some fairly tedious passages that I was basically skim-reading just to get through them. In particular, the histrionics of Ianthe and her swain got old really, really quickly, and by the time we got to France, I was just hoping for Sylvester to turn up and make things interesting again.

The romance works better than many Heyers, in that the developing relationship between the hero and heroine is clear to see. I liked, too, Sylvester’s disintegration from suave society man who always knows the correct thing to say to incoherent lover, getting everything wrong. But Phoebe is just a termagent at this point, and I really wanted to slap her. So many Heyers end with the heroine too stupid to recognise her own feelings, and having to be forced to acknowledge them by the hero sweeping her into his manly arms for a passionate kiss. I’d like it if, just once, the story could end with him proposing and her accepting him in a sensible manner. Still, four stars for a nice romance, some laugh-out-loud moments and a good array of excellent side characters (the horrible Ianthe notwithstanding).