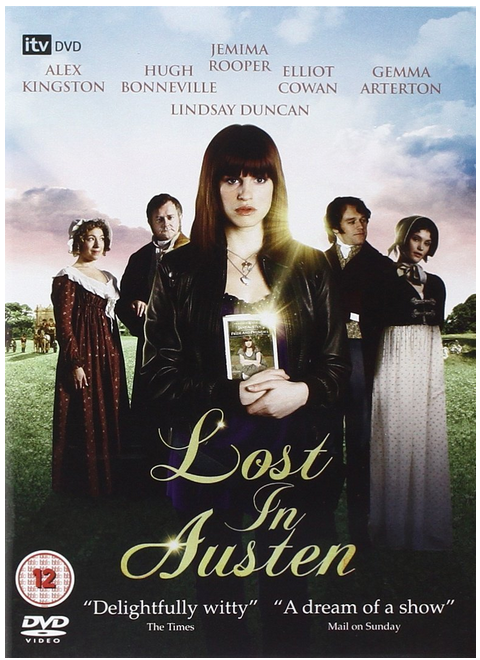 Well, this is a riot and no mistake. A modern woman obsessed with Pride and Prejudice finds a portal to the book world in her bathroom when Elizabeth Bennet materialises there. While Elizabeth stays in modern Hammersmith, Amanda Price goes to Longbourn and tries to steer the characters to their true destinies, and fails in spectacular fashion. Jane marries Mr Collins, Charlotte Lucas goes off to be a missionary in Africa, Lydia runs away with Mr Bingley, Mr Bennet duels him, Wickham is a Puck-like mischievous spirit who’s not wicked at all, and Darcy falls in love with Amanda herself.

There was a huge amount to enjoy in this. I wasn’t much fussed about Amanda or Darcy, not least because he was a foot taller than her, which I found horribly distracting (yes, I know, how shallow of me). I wasn’t convinced by Elizabeth, either. But Hugh Bonneville and Alex Kingston as Mr and Mrs Bennet were an absolute joy, both like and unlike their book versions. Mrs Bennet in particular is far less silly and more… not intelligent, exactly, but certainly streetwise. She knows what she wants for her daughters and nothing will stand in her way.

The other Bennet sisters were terrific, too, and so visually perfect that I was right there with Amanda when she correctly identified each one. I liked Mr Wickham, who had a great deal of charm, but I couldn’t for the life of me see why he would be so helpful to Amanda. Plot reasons, I suppose.

Now, a lot of the logic of the book fell apart because of the oddball things that were happening, and everyone seemed to bounce around the countryside between Longbourn, Kent, Pemberley and Hammersmith as if the distances were nothing at all, and everyone turned up everywhere, often with no explanation, but it never mattered. Historical accuracy went out of the window, too. The writers obviously had no clue about Georgian meals, or correct manners, or legal matters (no, you can’t just get married in two weeks flat, you need a licence, and you can’t annul a marriage for non-consummation). None of it mattered. The whole thing was so gloriously funny that it just rolled along in its own little bubble of craziness.

Great fun. Absolute purists might cringe, but I loved it.