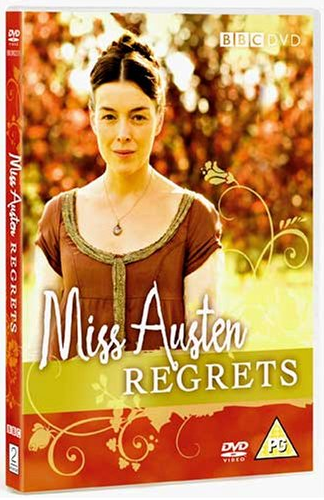 A bit of a weepy, this one, but a splendid attempt to examine why it is that some of history’s finest love stories were written by a woman who never married. The cast list is stellar, and every single one of them pulls their weight, not a dud amongst them.

The premise is that Jane is called upon to advise her niece Fanny as to whether her suitor Mr Plumtree is a suitable match for her. This causes Jane to reflect on her own missed opportunity, a proposal from a man of wealth and property, accepted initially and then rejected the following morning, which would have secured not only her own future, but also that of her mother and unmarried sister. Because of this refusal, the three ladies slide into genteel poverty, like Mrs and Miss Bates in Emma. There is also an uncle of Fanny’s, who proposed at one time and clearly still regrets losing Jane.

The Jane depicted here is a glorious character, clever and witty, if a little cynical, every line filled with subtle humour. I understand that much of the script is derived from her letters and I can well believe it. Her talent shines in every utterance. And Jane is a flirt! And a romp, running around the garden drinking champagne with Fanny and peering in at the men playing cards, commenting on their attractiveness, both physical and financial. Has he a castle, she enquires at one point.

This is all delightful, but the theme of money runs through the film like a misplaced thread on stitchery. The novels all say to marry for love, but in real life Regency women rarely had the option. One waited patiently, being ladylike, until a man offered for one. Then there were but two choices: accept, and live out your days mired in permanent pregnancy, with all its attendant risks; or refuse, and hope for a better offer, with the risk of a decline into impoverished spinsterhood. In real life, two of Jane’s sisters-in-law died in childbirth (both during their eleventh confinements!), and two others had wives who died for other reasons. It was an uncertain time to be a woman. And yet the genteel but grinding poverty of spinsterhood was hardly much better.

In many ways this is a gloomy film. Jane and her mother and sister spend their lives moving from place to place, struggling to keep their heads above water financially, totally dependent on men for such security and help that they have, and harbouring simmering resentments for years over Jane’s rejected proposal. It’s easy to see that some of her acute observations in the books arise from a degree of world-weary cynicism. And yet when Jane is in party mood, she’s so witty and lively, it’s hard to reconcile the two sides of her character. Purists will probably hate the film, but I loved party animal Jane and the acting is so sublime from all involved that I found the film a joy to watch.