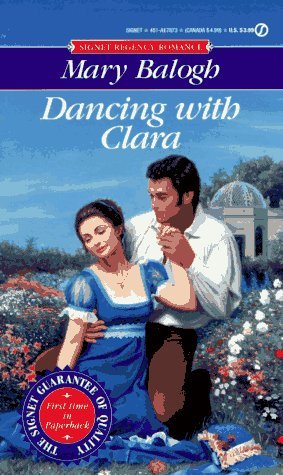 This is the third Mary Balogh I’ve read, and it has exactly the qualities I enjoyed in the others – two fascinating characters thrown together in an intriguing way and having to sink or swim. Naturally, there’s a lot of sinking before our hero and heroine learn to swim together, but it all feels horribly realistic and totally understandable.

Here’s the premise: Clara is twenty-six, not particularly beautiful and unable to walk after a childhood illness. She is, however, very rich and when deeply-in-debt rake Freddie makes approaches, she decides that, yes please, she’d very much like to be married to such a handsome, charming and virile man, even if he is a total wastrel. So here’s an interesting situation right from the start. Both parties are marrying not for love but for selfish reasons. Both are, in a way, deceiving the other. And it’s easy to see how everything could come crashing down.

Things start well. His family take to her, they have a lovely wedding and spend an idyllic week at her country estate, where Freddie devotes himself to making her happy. He really is a total charmer at this point, right up until the moment when Clara blurts out that she knows he’s not in love with her and he can stop all the ‘my love’ nonsense. And so he stomps off back to London in a huff, and picks up the threads of his old life – the drinking, the gambling, the womanising.

And here we come face to face with the big problem of this book – everyone loves a rake who reforms, but Freddie never really does. Every time things go wrong, he sinks deeper into his dissolute lifestyle. He hates himself for it, but he’s unable to stop. I so badly wanted him, just once, to haul himself back from the brink. But he never does. Judging by the reviews, for a lot of readers this was just too much to stomach, and I completely understand that reaction. The ending, also came in for much criticism, which again I understand.

In the end, though, I took into account the fact that the book was published in 1993, and has to be viewed through the telescope of twenty five years. Attitudes were different then, and it seems churlish to judge a book from that era by 2017 sensibilities. So although I don’t excuse Freddie’s weakness, it never spoiled my enjoyment of the story overall. I loved the characters, the way they worked through their difficulties as best they could, and the realistic way the romance progressed. I’m not totally convinced that they will manage to be happy for ever, but they have a solid foundation for the foreseeable future, at any rate. And, as always, Mary Balogh’s writing is superb. Five stars.

7 responses to “Review: ‘Dancing With Clara’ by Mary Balogh”