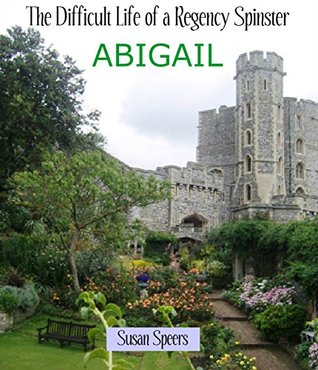 A delightful book that almost made it to five stars. This is the first of a series focusing on Regency spinsters, those not born to great beauty or wealth or connections, who must eke out an existence as best they can. Miss Abigail Grey is a little-regarded step-daughter of her mother’s second husband, and, with her mother long-dead, has a difficult future ahead of her. But when she accompanies her wilful half-sister to a house party for the Marquess of Southey to choose a bride, Abigail recognises him as the impoverished soldier she rejected seven years earlier. There’s never any doubt as to where this is going, but the journey is entrancing.

I liked the Marquess very much, a sensible, thoughtful man, doing his duty at his aunt’s behest. A lesser writer would have had him rushing into a betrothal with the half-sister before realising his mistake, but no, he courts Abigail very determinedly, if discreetly, and never allows himself to be drawn in by the young ladies vying for his hand, or their scheming mamas. And Abigail behaves with (mostly) propriety, and has good reason for continuing to resist the marquess. And thereby lies a minor grumble – it surely wouldn’t have been too difficult for her to explain to him the reason for her refusal. It would have saved a great deal of difficulty.

The other characters are lightly sketched in, but I’ve been pleased to learn that some of them turn up later in the series. I didn’t detect any historical inaccuracies, and the writing avoided the pitfall of anachronistic manners or dialogue. Some aspects felt very Heyer-like (the wilful young ingenue and the callow youth, for instance, and perhaps the marquess falls into the world-weary older man role so beloved of Heyer, although happily without rakish tendencies). In almost all respects the book was the greatest pleasure to read.

The exception, and the reason for the loss of a star, is the gratuitous sex scene in the conservatory. I have no problem with sex in a Regency romance, but this felt utterly out of character for both parties. I would have loved a detailed proposal scene at this point, with the marquess spelling out how his feelings have deepened over the years since their brief earlier meeting, and how well-suited they were. Passion can be expressed just as well in words as in horizontal action.

Apart from this blip, the book was well-nigh perfect for me, I inhaled it in a day, and am going straight on to Belinda. Four stars.