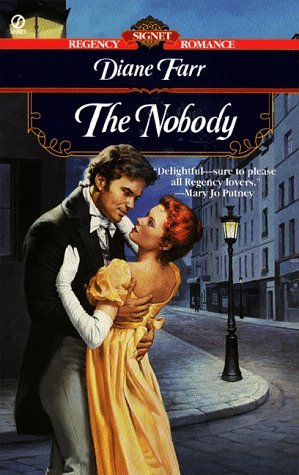 An utterly delightful book, that I loved from start to weepy finish. Caitlin is the older sister who goes along for the ride on her prettier younger sister’s debut season in London. Nothing much is expected of Caitlin, and she isn’t even presented at court (the family couldn’t afford two court dresses, which made me very sad for her), and when her sister is off curtsying to the Queen, Caitlin is at a musical evening with her new friend, overhearing herself described by a snobbish lady of the ton as a nobody.

Humiliated and upset, Caitlin makes a run for home through the dark streets of London. She witnesses a man running away from a group of thugs, and finds herself unceremoniously pulled into a passionate kiss so that he can evade his pursuers. They part, after a lively discussion of the proprieties pertaining to the unusual situation, without either knowing who the other is. But it isn’t long before they find out, and Caitlin realises she’s been kissed by the brother of her new friend, a man who is betrothed to the snobbish lady who insulted her.

Now all this is fairly implausible, but very entertaining. The banter between the two is lively and witty, especially so on his side, and we can see exactly where this is going. Except that Richard Kilverton is betrothed, and a Regency gentleman does not, under any circumstances, cry off from a betrothal. So the rest of the book is, naturally, focused on him trying to persuade the lady to cry off, instead.

Which leads me to my main, possibly only, grumble about this book. I can let Richard off that snatched kiss at the beginning, which was a desperate measure of self-preservation, and a pretty innovative one, it has to be said. But he then proceeds to pay an inordinate amount of attention to Caitlin, including (but not limited to) dancing the waltz with her (twice! On one night!) and sneaking out onto a terrace to kiss her rather thoroughly. Given that he’s engaged to someone else, this is very ungentlemanly behaviour, and would be unforgivable… except that he really is incredibly charming and delightful, and it’s very hard to be cross with him.

Needless to say, with a bit of sleight of hand, everything comes right, and the subplot turned out to have an unexpected ending, and I enjoyed the whole unlikely story so much that I can’t give it less than five stars.

NEW SERIES! Silver Linings Mysteries: A ship sinks off the Cornish coast, with the loss of many lives. But every cloud has a silver lining… A new series of six books. Books 1, 2, 3 and 4 are now out, and books 5 and 6 are available to pre-order.