The fifth of this series, and yet again a completely different story. Not for this author the constant reworking of one threadbare plot over and over. Not all the books are totally successful, but they’re all intriguing, and the hope of uncovering another gem keeps me reading on through the alphabet. 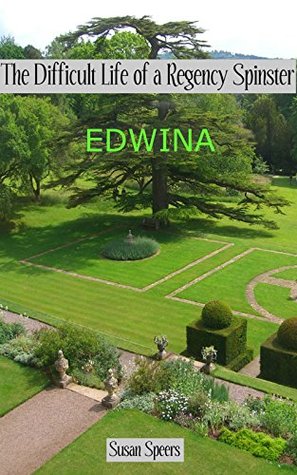 The spinster this time is Edwina Howlett, or Garrett as she calls herself for much of the book, for reasons that never made a great deal of sense to me. She’s been the governess/companion to spoilt, wilful Louisa Hart, who was one of the potential brides invited to the house party in Abigail. I really like that these books are loosely connected in this way, without the artificial constructs of an array of brothers or sisters. Now that Edwina’s charge is betrothed and shortly to marry, she’s no longer needed and takes up a position as a school teacher with a family friend, first in Bath and then in London. But it soon becomes clear that a great deal went on behind the scenes during Edwina’s time at Hartfield.

Edwina herself is a very likable character, very sensible and down to earth, yet holding steadily to her one true love. I never got much sense of her appearance, and I couldn’t tell you whether she was plain or pretty, tall or short, or whatever. Maybe it was all in there and I just missed it, I don’t know. Her love interest, however, I can see very clearly.

He doesn’t come out of this too well. Sir Geoffrey Hart is the father of the girl Edwina was governess to, and therefore an older man who ought to know better. He’s thrown Edwina out of his house, in harrowing circumstances, and immediately betrothed himself to an unpleasant woman of his own age, and although his reasons for this gradually become clear, it is still utterly reprehensible behaviour in a gentleman. Inevitably, despite the apparent permanent parting, he ends up bumping into Edwina at every verse end, whereupon he blows hot and cold and is generally thoroughly annoying. At odd moments he becomes seriously heroic, only to abandon Edwina without a word immediately afterwards. Honestly, I just wanted to slap him upside the head. The contrast with the steadfast and devoted Captain Palfrey in Daphne is striking. Not all heroes need to be the same, but they need to have some redeeming qualities besides the heroine being in love with them.

The author provides an attractive alternative suitor in Mr Richard Ravenscroft, who is a totally nice man, independently wealthy, handsome and pleasingly devoted to Edwina. But he never really develops beyond this sketchy outline, and it doesn’t matter anyway, because Edwina is besotted by her flaky older man. There are some subplots going on in the background, but essentially they are just feeding the romance plot.

In the end, Edwina begins to cast off her very convincing impression of a doormat and starts to stand up for herself, and her love interest finally comes good. And about time too.

These books are so frustrating. On the one hand, the stories are fresh and different and very well grounded in the Regency era. On the other hand, the editing is pretty dire, with commas, quote marks and capital letters randomly added or missing, and far too many choppy sentences and clunky dialogue. The plotting is clunky, too. To give but one example, Edwina meets Richard Ravenscroft accidentally at an inn while they are travelling in different directions. They’ve barely got past the awkward introductions (he’s bathing in the river at the time) before he’s spilling his life history and asking her advice, at great length. To describe this as implausible doesn’t begin to do justice to the random let’s-just-throw-them-together nature of it.

And yet, despite all my grumbles, here I am reading steadily through the series. I already have Felicity and I’m pretty sure I’ll go on to G (Geraldine? Georgiana? Grace?) and H (my money’s on Harriet) and right through to Z (Zinnia? Zoe?). I would love to see the author slow down her production schedule and put a bit of polish on these, with decent covers and some solid developmental editing and proofreading. Then they could be something really special. This one is closer to a three star for me, but it tackles some serious issues and is so original in other ways that I’ll round it up to four stars.