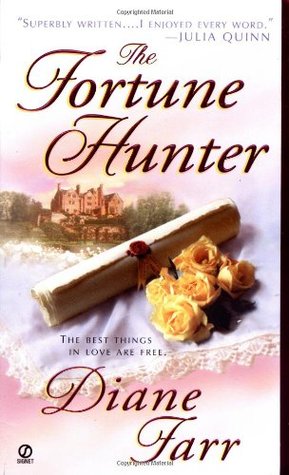 Oh boy (fans self). This was a sizzler and no mistake. And yet, pretty clean. There’s one actual sex scene, although very tastefully done and completely non-graphic, but the rest of it is all kisses and gentle touches. And yet… so hot.

The story picks up the most interesting character from the previous book, Falling For Chloe. Lord Rival is one of the ton’s most notorious rakes, who’s been living a precarious hand-to-mouth existence ever since he inherited his run-down estate some twelve years ago. He’s so impoverished that he lives in rooms with no servants, and does all the work of taking care of his clothes. He survives by playing piquet for money against rich, not terribly bright women who fall for his charms and see their losses as a fair price for an hour in the gaming room with his undivided attention. But he’s beginning to realise that he needs to do something more permanent to resolve his financial woes, and that means marrying an heiress.

Top of his list is the elusive Lady Olivia Fairfax, and he meets the lady in the most inauspicious circumstances. She is dressed in old clothes, engaged in cleaning up the stored treasures of a recently deceased gentleman for one of her charity projects. He, not unnaturally, mistakes her for a maid, and so they get off on quite the wrong foot. But some odd clauses in the deceased gentleman’s will throw them together anyway, and since he’s determined to win her and she is equally determined that he won’t, the sparks soon fly.

There’s an oddness about money in this book. George (Lord Rival) is supposedly dead broke, but in the previous book he managed to win several hundred pounds at a time from his besotted victims, and in this one he’s offered an annuity of eight hundred pounds a year. These are large sums, and with a combination of the annuity and some light card play, he could give himself a substantial income of several thousand a year, more than adequate to restore his estate. But, no matter.

This is one of those books that takes a completely unlikeable character and, by shining a light on his history and circumstances, makes him into something approaching a real hero. I liked George a lot, and was really rooting for him to work out what it was that he really wanted, which, rather foolishly, he seems to be in the dark about. Olivia I was less enamoured of. She has the hots for George right from the start (as all the women he meets seem to), and she allows him to take a great many liberties, yet she won’t agree to marry him. I thought he had the patience of a saint to put up with her yes-please-no-don’t-yes-please shenanigans. But the banter between them is glorious, and did I mention how hot this book is?

The ending is perfect. I did wonder how the author was going to resolve the central issue of the situation, but she carried it off magnificently. That’s all I will say about it. Five stars.