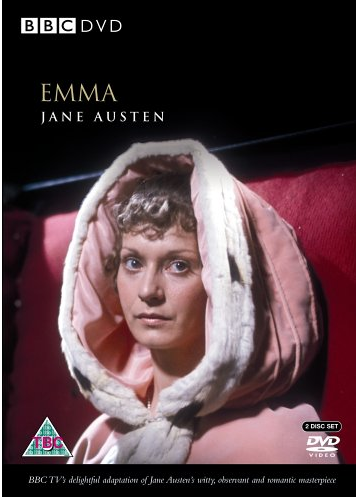 1972 version: RADA has a lot to answer for. They’re the ones who produced all those cut-glass accents so beloved of the BBC and its ‘received pronounciation’, who taught actors and actresses how to enunciate on stage to catch the audience in the upper balcony. Which is lovely for a stage production, but doesn’t work at all in a TV production. Doran Godwin’s Emma grated on my ears every time she opened her mouth. She looked the part, certainly, but her voice and the lack of expression sometimes in her face all came directly from live theatre.

This is, really, my main complaint about the whole show. It’s just too stilted and rigid to be believable. Most scenes are managed as if they were on stage, with the principals speaking and everyone else more or less immobile. Even the ballroom scene isn’t particularly animated. Compare this with the busy scenes in the 1995 Pride and Prejudice, where the minor characters are conducting little vignettes in the background constantly.

Of the other characters, I liked John Carson as Mr Knightley, although he seemed a little too old for Emma, and for the first five and a half episodes, I thought he was too avuncular ever to make a credible lover. But when it came to the proposal scene, he pulled it off very well (or as well as this stilted version can manage). Miss Bates was excellent, too, with just the right level of constant chattering. Her performance when Emma comes to apologise after Box Hill, when Miss Bates is too distraught over Jane to care about any slight to herself, was probably the finest piece of acting in the whole series.

Debbie Bowen was excellent as the sweet but not terribly bright Harriet Smith, with just the right degree of naive adoration of the lover-of-the-moment. The Eltons were both good, but then that shouldn’t be hard; Mrs Elton, in particular, is a peach of a role. The Westons and Frank Churchill were adequate, and Jane Fairfax was suitably cold initially, and distraught later. I particularly liked her warmth at the end when all was revealed.

I have to mention the costumes. I have no complaint to make of the men, but the women all wore the same style of gown, regardless of rank. Once or twice I spotted Emma and Jane Fairfax wearing identical sleeve designs, and Harriet Smith’s bonnets were just as elaborate as Emma’s, although perhaps she didn’t have quite so many of them, and Emma did have plenty of fur trimmings to her coats and hoods for the cold weather.

All in all, a competent production, which relied rather more on the original words of the book than is common in later productions. These earlier versions are all words and little emotion, whereas the modern ones are largely about the emotions. The 1995 Pride and Prejudice is the one that, in my view, best marries respect for the author’s own words with some liveliness. 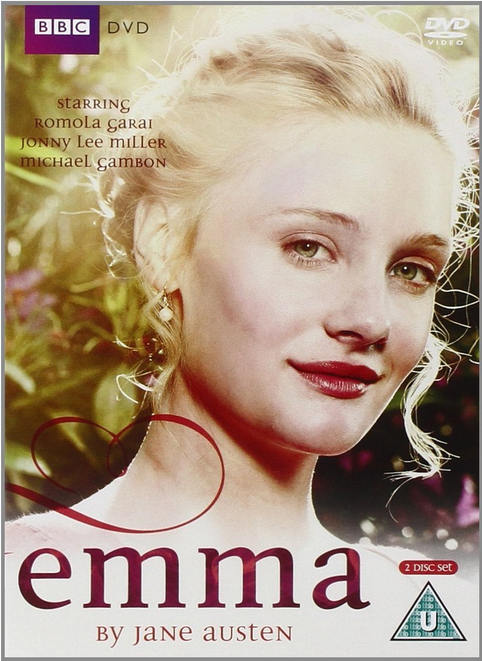 2009 version: Where to begin with this? It’s a real curate’s egg of a production, some dire stuff all muddled up with flashes of brilliance. Let’s start with the brilliance.

The opening scene shows (essentially) the whole life story of Emma, Jane Fairfax and Frank Churchill, showing how all three suffered an early tragedy, but Emma, being rich, got to stay in her luxurious home and grow up unruffled by life, while the other two had to move away and live with strangers. I really liked this view of the three of them, and their deep connection, which I’d never fully realised before.

More brilliance: Jonny Lee Miller is Mr Knightley. He’s old enough to be a convincing brother-figure, yet young and sexy enough to be a convincing love interest. As a character, I’ve always found him to be a grumpy old sod, and there’s something icky about a man who watches a girl grow from baby to adult, and then falls in love with her. Miller gives Mr Knightley enough personality to outweigh his innate grumpy old sodness, and somehow conveys his growing love for Emma without it being the least bit icky.

But the other characters – oh dear. I’m sorry, but I didn’t like Romola Garai’s Emma at all. She seemed too modern, too face-pulling and bouncy, too Essex-girl and not the perfect (if immature) lady she’s meant to be. She is, after all, the most important lady of the neighbourhood, but she acts like a wilful teenager. She was also far too informal – in fact, all the characters were too informal, their bows and curtsies mere gestures. I did like, however, the way Emma displays an obvious affection for Mr Knightley right from the start. She’s always pleased to see him and disappointed when he leaves, and that’s the first step on the road to love.

Tamsin Greig was a very disappointing Miss Bates. Not that there was any deficiency in her acting (she’s an incredibly talented lady) but she was asked to play Miss Bates with pathos rather than irritating stupidity and endless chattering, and while there was a certain underlying truth to that perception, it just makes Emma’s neglect and rudeness inexplicable. And Mrs Bates is rendered more or less catatonic in this production, instead of merely elderly and a bit deaf.

Michael Gambon was, I thought, a little too lively as Mr Woodhouse. Mr and Mrs Elton were fine, but they’re hard roles to get wrong. Harriet Smith was OK, and Frank Churchill I don’t remember at all, so… um, well, not a memorable performance, obviously. Mr and Mrs Weston I loved. Mrs Weston had a lot more screen time than I remember for the role, but it was immediately obvious how well she had filled the role of substitute sister for Emma. And Robert Bathurst can do no wrong (he was lovely in Downton Abbey, too), and made an admirable Mr Weston.

The costumes – I really disliked the costumes. All the women wore pretty much the same styles, with virtually nothing to distinguish Emma’s higher rank and expensive dressmaker from Harriet’s home-made efforts (which in her position they must have been).

There was an odd moment at the Westons’ Christmas party, when Emma ends up in the carriage alone with Mr Elton. In the book, it’s a mix-up, but here John Knightley deliberately gets into the other carriage, leaving Emma with Mr Elton, and I found that an inexplicable decision in a gentleman, to leave his unmarried sister-in-law alone with a man in a closed carriage, even if the man is in the clergy.

But the ball at the inn was delightful. Having recently watched the recreation of the Pride and Prejudice Netherfield Ball in a room not unlike the one used here, it all felt very familiar, and perfectly executed. I loved the energetic dancing, and I adored the romantic Emma-Knightley dance. And was that a waltz??

On the whole, enjoyable, with flashes of brilliance, but a lot of wasted opportunities, too.