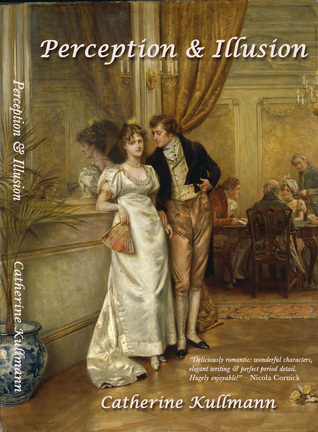 This book made me uncomfortable. One of the tropes I dislike intensely in any kind of book, although it’s particularly prevalent in Regencies, is the misunderstanding between hero and heroine. If the entire plot could be resolved if they just sat down and discussed it over a cup of tea, then it’s usually an epic fail for me. This book has two qualities that make it compelling despite this, however. One is that it’s beautifully written, every word pulling its weight. The other is that the mix-ups are actually believable. And the final clincher is that, given the title, this is exactly what the story is about, so it’s a bit unfair to quibble.

The premise is that our hero, Hugo, and heroine, Lallie, meet at a house party and are instantly attracted in a restrained, Regency way. But circumstances, and a villainous father, conspire to force them to rush into marriage perhaps rather sooner than they otherwise would. Things begin well, but when they go up to town, she’s drawn away by his older sisters, he feels left out, and there’s an abandoned mistress thrown into the mix as well. And gradually, despite the best intentions of both, they drift apart and everything goes wrong.

In some ways, this reminded me of Georgette Heyer’s April Lady, where husband and wife are in love with each other, but never actually say so (until the end of the book, at least). But in that book, the hero was somewhat older than his wife, so his stupidity was less excusable. Here, the two are much of an age, although both are old enough to be sensible. To be fair, they both grew up in oddball households without an easy relationship with siblings of a similar age, so perhaps their awkward dealings are understandable.

This is a very wordy book, so there’s a lot of angst worked out in lengthy dialogues, and over-long analysis sometimes of who thought what and when. There are also an enormous number of characters that, frankly, I couldn’t keep track of. That’s a realistic representation of the intertwined Regency aristocracy, but it does make for a confusing read. The research here is spot on, although I could have done with a touch less of it on the page. There seemed to be a lot of situations that the author felt the need to explain at length, which could easily have been glossed over. It slowed the book down a great deal in the middle parts.

I liked both Hugo and Lallie a great deal. Hugo is very much my kind of hero, a thoroughly nice man with good manners and no terrible habits, and although he’s had a mistress for a while, he gave her up before courting Lallie. Besides, it was the intimacy of life with his mistress that propelled him towards matrimony, which is a nice comment on Regency men – the mistress as an immature stage in his life. I was disappointed though, that he lost his temper so spectacularly at crucial moments. Regency men were all about public restraint, whatever they did in private, so I’m not sure he would ever have spoken so rudely to anyone, especially not to his wife. And I’m still not quite sure why the two of them couldn’t simply have said what they wanted, instead of seething in silent resentment or assuming they knew what the other person wanted. But that was the story, so whatever.

Of the other characters, most were well-meaning, if not quite angelic. There were only two villains, and sadly they fell into the caricature moustache-twirling variety, and seemed to be there purely to propel the plot along the correct path. I have to confess, however, that the stratagem of the father arranging a marriage to an obnoxious man to keep hold of the daughter’s fortune, causing her to run away, is not one I can cavil at, having used exactly the same device in one of my own books. My own heroine had no already-interested Hugo to bump into, but she went through something of the same ups and downs with her husband as Lallie.

One aspect of the book I liked very much was the attitude of the loyal retainers at Hugo’s family estate when he arrived with his new bride. The little knots of people waiting to watch the carriages go by, and curtsying and bowing to the new mistress, and the lodgekeeper’s daughter presenting a posy as they leave are charming touches. So many authors of Regency works forget about the lower orders altogether, but here’s a reminder that the servants and tenant farmers and local suppliers and craftsmen were intimately involved with the local great family. It was their miniature version of royalty! So kudos to the author for that.

An interesting book, a little different from the usual. The misunderstandings that drive the plot and some characterisation wobbles would be a three star for me, but the excellent writing and depth of research brings it up to four stars.