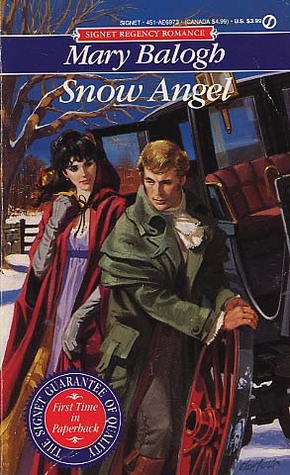 One of the things that Mary Balogh does brilliantly is to take a wildly unusual situation, toss her characters into it and leave them to sink or swim accordingly. In this case, Rosamund and Justin meet entirely by chance on the road in the middle of a snowstorm. She has just quarrelled with her brother and sets out to walk – somewhere, anywhere. He is trying to recover something from a planned week of pre-wedding debauchery where all the other participants have cried off. They escape the snow in a hunting lodge, and, since she’s a widow curious about sex with a younger man, and he was expecting a week of sex anyway, they retire to the bedroom pretty quickly. And then, a month later, they meet up at a house party where he is expected to propose to her niece. How very awkward.

Of course, this requires some sleight of hand. How could she not know who he is? Because he fails to introduce himself properly, that’s how. He tells her he’s Justin Halliday instead of the Earl of Wetherby, and frankly, there’s no way on earth he would ever do that unless, for some unfathomable reason, he was deliberately intending to deceive her. So already there’s some suspension of disbelief involved. Then there’s the sex aspect, and while he might not worry too much about a possible pregnancy, the fear of an illegitimate child was great enough to make most respectable women think twice about it. And I don’t believe for one moment that Regency women were sufficiently knowledgeable about ovulation to use it as a contraceptive device. This is a time when medical practices revolved around balancing the humours in the body, and bleeding the sick with leeches and cutting. So telling him that she’s unlikely to get pregnant is hugely implausible.

So the house party goes along merrily, and Justin is too committed to draw back, but his intended has been given the freedom of choice. If she had half a brain in her head, she would have told him she was in love with someone else. I get that there was a huge weight of expectation there for a marriage which had been planned for years, but the whole business was drawn out to the nth degree, and seemed quite silly to me. And meanwhile Justin and Rosamund are busy trying to keep their hands off each other, and not succeeding terribly well.

Naturally, everything gets resolved satisfactorily in the end, but not because of anything the hero or heroine did. I would have liked to see more emphasis on the absolute impossibility of the hero backing out of his engagement under Regency societal rules, because without that he just looks like a wimpy dithery sort of guy, trying to string both women along and unable to summon up the gumption to do what’s necessary.

This is as well-written as all Balogh’s books, and I loved the premise and the sex-fuelled first half, but the flaws in the plot and the long-drawn-out second half keep it to four stars.