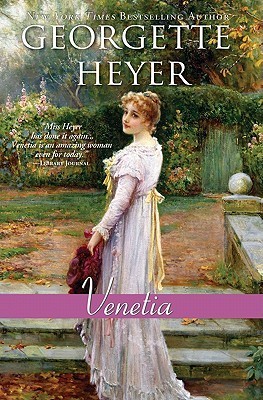 Hooray for a heroine who is smart, resourceful and knows her own mind right from the start! So many of Heyer’s heroines somehow don’t recognise their own feelings until the hero sweeps them into his manly arms and kisses them thoroughly, but Venetia is not of that type. She sees her soul-mate in Damerel almost at once, and isn’t the slightest bit deterred by his rakish past. In fact, at the end of the book, her urgency in wanting to get back to him is as much driven by fear that he will take another mistress as anything else.

Venetia is twenty five, and has lived secluded all her adult life, firstly by the vagaries of her eccentric father, and later by the need to deputise for her absent brother, the heir to the estate, and her highly intellectual younger brother, who has a leg damaged by childhood illness. She is pursued by two dogged swains. One is a suitable and worthy but deadly dull man, who never respects Venetia enough to believe her when she says she doesn’t want to marry him. In fact, he never believes anything she says, because he’s a man and he knows better. The other is very young, suffering from over-romantic calf-love.

Into this state of stasis drops the owner of the neighbouring, much neglected, estate, Lord Damerel, a renowned rake and ne’er-do-well. As is very commonplace in these stories, his every action within the confines of the book are perfectly respectable (with one exception – his first meeting with Venetia). But from then onwards, he lives a blameless, not to say generous and open-hearted, life, setting his estate in order, taking Venetia’s hard-to-manage brother in hand and behaving with perfect propriety towards Venetia herself. It’s claimed that his objective is to seduce her, but frankly he never steps outside the bounds of propriety once, so it’s hard to believe.

The romance in this book is one of the most natural and charming that Heyer ever wrote. These two are perfect friends, getting along so well that you wonder quite how they can ever be kept apart. But kept apart they are, and for that stupid old chestnut of a reason, ‘the heroine’s own good’. Fortunately, Venetia discovers the truth and, being a resourceful lady, sets about securing her own happiness with great determination. My eyebrows rose at her journey all alone on the mail coach, and there’s just a touch of deus ex machina in the way she resolves her difficulty, but whatever.

Venetia’s family, even the always absent heir, Conway, is steeped in selfishness. The father withdrew into seclusion, trapping Venetia with him. The older brother is both selfish and indolent, one of those people who just never knuckles down to doing anything that might make him the slightest bit uncomfortable. The younger brother is immersed in his books, to the point of barely noticing the existence of his sister. And the mother – well, let’s just say she was pretty selfish, too. So it comes as no surprise that when it come to the crunch, Venetia decides to be selfish, too, and grab her happiness by the scruff of its neck, regardless of her family. And of course Damerel has always been selfish, too. I do wonder whether he will reform or not. The two have this delightful discussion at the end of the book, and I’m not at all sure whether this is serious, or only partly serious or all in fun:

The final scenes are lovely, and there’s the usual array of wonderful minor characters to enjoy. This is more wordy and introspective than many Heyers, and I didn’t find either of the two suitors worthy of the amount of words expended on them, but never mind. A terrific heroine, a charming and un-rake-like hero and a wonderful romance – five stars.