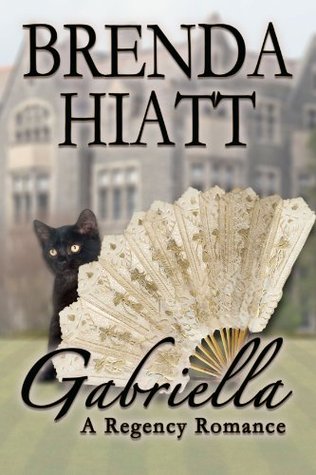 This was a disappointment. The premise is fun, if not wildly original (it’s basically the plot of Georgette Heyer’s Arabella, with a few minor variations), but the execution is not all it might be. The characters have some charm, but the writing lacks lustre, with dialogue that feels too modern and a number of historical inaccuracies.

Let’s deal with the plot first. Gabriella (shortened infelicitously to Brie) is an impoverished younger daughter of a veterinary surgeon, about to be launched into society by her social-climbing and catty older sister Angela. At an inn en route, she sees a maltreated horse and gives the owner a piece of her mind. He, having been interrupted in mid-seduction, isn’t best pleased. But back in London, he’s lost a wager, and finds that his penance is to bring out country-mouse Gabriella (sorry, I refuse to call her Brie; that’s a cheese, not a person). Needless to say, he’s a duke (aren’t they all?).

So far, so good. Of course, anyone who’s read a few Regencies could plot out the rest of the book – the reluctant early meetings, the growing attraction, the rival suitor who turns out to be a cad, the realisation of True Love just when All Seems Lost, and naturally, the Misunderstanding. Heaven preserve me from misunderstandings. But none of this is a problem, because with a light hand, some lively dialogue and some amusing side characters, this could be a delightful piece of froth. I actually believe that the author’s capable of that, for the bare bones were there, but it just fell a bit flat for me and was too solemn to be properly entertaining.

The biggest problem was the number of historical inaccuracies. The sister must be the world’s worst chaperon, for she allows Gabriella to gad about on her own with her suitors and to wander about unattended at balls and the like. The duke even takes her to Almack’s with only his younger, unmarried sister with them, which leaves both of them unchaperoned. And then he waltzes with her without the explicit permission of one of the patronesses (he says he’s asked, as if that would cut any ice!). And then he generously gives permission for Gabriella’s suitors to call on her the next day, as if he had any right!
I could go on, because there were a lot of these niggly little things that don’t matter much to most people, but knocked me out of immersion right away. But hey, I’m nit-picky about this stuff. And I don’t think she’d call him by his first name, even when he asked her to. She might show her intimacy by calling him Ravenham instead of your grace, but not Dexter (another shockingly unRegency name).

On the plus side, the romance, once it gets going, is rather charming, I liked the two main characters and the editing is up to scratch, and it’s a pleasant, undemanding read. I’m sure it would work fine for anyone who’s less pedantic than me about details. I understand this was the author’s first foray into the genre, and there’s enough promise in this to make me want to try a later one. Even so, there were enough niggles to keep it to three stars for me.