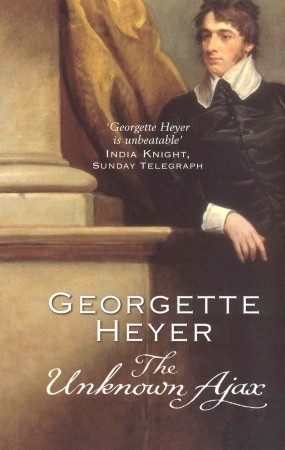 Well, Hugo’s a charmer, and no mistake. Coming to this directly after Venetia is a bit of an eye-opener, for the contrast between sophisticated rake Damerel and straight-down-the-line Hugo could hardly be more marked. The leading ladies are very different, too, but whereas Venetia leaps off the page in all her self-assured glory, Anthea is very much a minor note to Hugo’s symphony. For this book is all about Hugo, make no mistake.

The premise is an intriguing one: irascible Lord Darracott has lost his eldest son and grandson in a boating accident. Now his heir is the unknown son of second son, who disgraced the family name by marrying a Yorkshire weaver. Lord Darracott summons the heir to Darracott Place, and also summons various other members of the family to meet him and whip him into shape, because he’s bound to be an ill-mannered oaf, isn’t he?

Hugo, when he arrives and realises the low expectations of him, amuses himself by playing up to his relations’ worst fears, by laying on the Yorkshire brogue with a trowel, and playing the bovine bumpkin to perfection. It’s the ladies, interestingly, who spot the deception first, and dear old grandpapa, grumpy old sod that he is, never quite gets to grips with it until the end.

Surrounding Hugo is a pantheon of brilliantly realised characters: Claud the fop, Vincent the sardonic Corinthian, Matthew the plodding unambitious one, Richmond the spoilt brat, Lady Aurelia the above-the-fray aristocrat and poor, harassed Mrs Darracott, not to mention the delightfully competitive valets, Polyphant and Crimplesham. All of this comes together into one gloriously over-the-top ensemble performance at the end, as the comedy descends into barely contained farce.

All of this is delicious, of course, but it isn’t a romance. The love interest, Anthea, is a perfectly normal, rational woman, intelligent and calm in a crisis, and with the wit to spot that Hugo isn’t nearly as oafish as they’d expected. That makes her a perfectly acceptable heroine, but in company with the sort of dazzling characters of Heyer at her best, Anthea is reduced to a dull glow, not the vivid brilliance of (say) a Sophy or a Venetia. Even when she bandies words with Hugo, she invariably loses the battle of wits, as she recognises herself. There are no fireworks in their romance, and no passion – it comes down to two people who liked each other almost from the first, became friends and… er, that’s about it, really. One review says that they ‘fell in like’, which sums it up beautifully.

One of the usual irritants that isn’t so obvious in this book in Regency cant, and just as well, because Hugo’s speech is stuffed full of Yorkshire dialect, and boy does that get old quickly. Once everyone was aware that he wasn’t an uneducated lout, the dialect could have been dropped altogether, for my money.

For those who read Heyer for the eccentric characters and the riotous escapades, this should be right up your alley. For me, while I loved Hugo to pieces and he is one of my all-time favourite Heyer heroes, almost up there with dear Freddy, the tame romance and that oh-so-annoying dialect keeps this to four stars.

2 responses to “Review: The Unknown Ajax by Georgette Heyer”