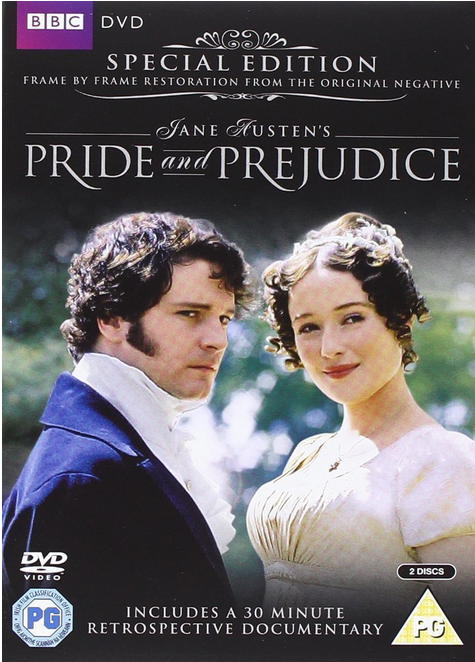 What is there to say about this that hasn’t been said a thousand times already? This is the definitive version, the Colin Firth and Jennifer Ehle version, the diving-in-the-lake version, the one that spawned a whole new love affair with Jane Austen and a spate of new dramatisations and inspired-by films, books and TV productions. I’ve been rewatching it for the fourth or fifth or sixth time, and enjoying it just as much as before, perhaps more so now that I know a little bit more about the Regency era than I did. Here are some random thoughts.

The first thing that struck me is how quickly it becomes obvious that Darcy is in love with Elizabeth. In previous viewings, Firth’s Darcy seemed like a bit of a stiff-necked so-and-so, whose proposal at Hunsford comes out of the blue. Yet his face often shows a softness as he looks at Elizabeth. Why did I never notice this before?

The second thing is that Alison Steadman’s Mrs Bennet finally grated on me. I’ve read so many reviews complaining about her shrillness, but this was the first time I really noticed it.

I noticed, too, just how licentious Lydia is almost right from the start. When she bumps into Mr Collins on the landing, when she’s in her underwear, any well-brought-up young lady would be mortified, but Lydia screams with laughter. And she wants to go into Meryton early one day in order to catch the officers before they’re dressed (probably not seriously, but she shouldn’t even be thinking about such things).

Most of the characters I think are pretty well perfect for their roles. Mr Collins, Mr Bennet, Mr Bingley and Mr Darcy are incomparable. Elizabeth I have reservations about, but I like her better with each viewing. I’ve never much liked Miss Bingley. She seems too obvious in her pursuit of Mr Darcy (but I suppose she is in the book as well).

I really liked that the six-episode format which gave the story room to breathe. No minor characters got wiped out, pretty much all the important scenes survived intact and there were few changes to the dialogue. I’m a particular fan of the piano scene at Rosings, where Elizabeth is to all intents and purposes flirting with Darcy through the medium of Colonel FitzWilliam (”Shall we ask your cousin why…?”). I adore this scene, because to her it’s lightweight joking around, but he’s genuinely responding to her and openly paying her compliments (”Your time has been much better spent.”). And his face when he looks at her is quite adoring. No wonder he assumed she was waiting for him to pay his addresses!

The letter is handled really well in this version. We see both Darcy’s determination to write it, staying up all night, and then Elizabeth’s reactions to it (’Insufferable presumption!’). And then the irony of her visit to Pemberley, when the housekeeper is praising Darcy to the skies, Mrs Gardiner is very confused and Elizabeth is unable to explain the discrepancy. And then the awkwardness of meeting Darcy again, his overwhelming civility and the way Mrs Gardiner immediately jumps to the obvious conclusion. This was all wonderful. And the meeting with Miss Darcy and Mr Bingley at the inn is perfect.

If I have any complaint at all about the later scenes, it is that the proposal falls short of expectations. Yes, it’s exactly as per the book, but, given the passion of earlier scenes – the first proposal, that moment of revelation in the inn when Elizabeth has just discovered Lydia’s folly, and the spirited debate with Lady Catherine – the final proposal really needs some fireworks. It needed it in the book, too, and it’s one of very few instances where I’d have been in favour of a little artistic licence.

But that apart, this version is, to my mind, well-nigh perfect. It stays true to the words and the spirit of the original, it captures the essence of all the characters, the acting, settings and costumes are awesome, and it gives the story the room it needs to breathe. The ensemble scenes, like the Meryton assembly and the ball at Netherfield are handled brilliantly, with little vignettes constantly firing off in the background, and all the major scenes are beautifully done. Scarcely a mis-step in the whole production.