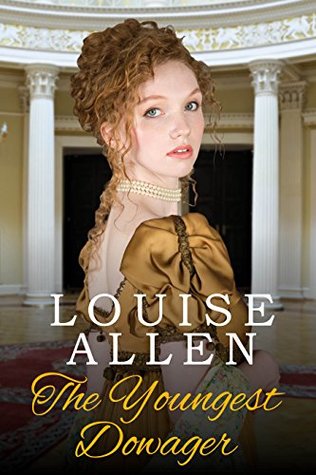 I’m not at all sure what to make of this one. On the one hand, I devoured it with relish, storming through the pages at a rate of knots. On the other hand, it has a number of aspects that make me roll my eyes so hard my head is spinning.

The premise is excellent. Marissa was married at seventeen to the much older Earl of Longminster at the command of her father. He was a cold and controlling man, and she can hardly believe that she’s now free. The new earl, Marcus, newly arrived from the West Indies, is very like his predecessor in looks, but not in personality. The two are drawn together, but she’s reluctant to get involved. He thinks her coldness towards him is because she’s still in love with her husband, and she thinks that all men are like her late husband. So far, so interesting.

But the plot soon becomes implausible, and in places downright preposterous. Marissa can hardly turn round without bumping into Marcus, usually at a moment when her secretly passionate nature is to the fore and she’s doing something hoydenish, and frequently when they’re alone. Almost at once, he’s claiming a passionate kiss and (surprise!) she responds to him. And then backs away hastily, remembering that he’s a man and therefore The Enemy.

This back and forth goes on for pretty much the whole book, with the encounters getting more and more ridiculous. Would you believe that a very proper Regency lady, a countess, no less, goes riding secretly at night, astride, naturally, and then goes skinny-dipping in the sea? No? Nor would I, but so it is. And would you believe that her secret ride is observed by the earl, who immediately summons his horse and chases after her, even stripping off and dashing into the sea to rescue her, gallant hero that he is? Well, he thought she was trying to kill herself. Of course he did. And he needed to console her pretty thoroughly after rescuing her. Of course he did. My eyes were rolling pretty hard at this point.

But you know what? It was a great scene anyway, and I loved it. The author is a terrific writer, however wacky the plot, and the story just carried me along. I had a lot of sympathy for Marissa, who had had a pretty horrible life and was naturally finding it a bit difficult to put herself in the power of another man. Marcus I found more difficult to like. He veered about too randomly for my liking, grabbing kisses at the most inappropriate times, and in a fairly domineering way, deciding that he’ll marry Marissa seemingly out of the blue, getting mad at her, displaying a violent temper and then bantering with her in a light-hearted manner completely out of keeping with his previous moods. He just didn’t make much sense to me.

And yet somehow, in all this hot mess of contradictions and misunderstandings and wrong assumptions on both sides, even including that tired old cliche, the mistress that’s in his past but the heroine doesn’t know that… sigh… it all works and I really enjoyed the romance. The sex scenes are hot (and fairly graphic, so if you’re not into that, steer clear), there’s real chemistry between the hero and heroine, and there was definitely emotional depth to it as Marcus discovers just what sort of a husband his predecessor was, and Marissa gradually learns to trust him and open up a bit. There are some fairly minor side plots, and the wayward sister (another tired old cliche) is pretty silly, but it was the main romance that made the book for me.

Even the several times my pedant-o-meter went off didn’t spoil my enjoyment. Drapes instead of curtains, for instance, or Marcus being called an Honourable (I spent ages trying to figure out a way to make him so before finally giving it up as an error). I wasn’t comfortable with all the ladies being in full mourning for over a year, either, because the Regency was far more flexible about that, but none of this spoilt my enjoyment, and the book was so well written and so accurate in most other respects, that I gave the author a pass. And she got a shed-load of brownie points for a couple of beautifully correct introduction scenes (most authors are far too casual about it; proper introductions were hugely important in Regency society).

A great read for those who like a spicier Regency, but the implausibilities keep it to four stars.