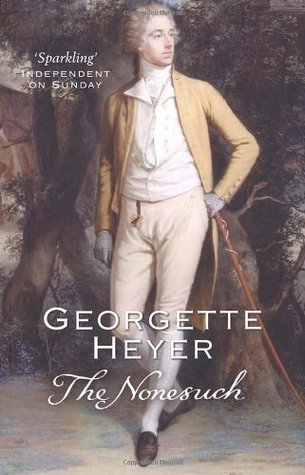 A delight from start to finish. A hero and heroine who are both sensible, reasonable people, a young buck who manages to be perfectly gentlemanly, a ‘villain’ who still manages to be sympathetic despite his total selfishness, and a plot that rattles along nicely without any eye-rolling moments. What could possibly go wrong? Well, I’ll come to that.

The premise: to the disgust of his less well-heeled relatives, Sir Waldo Hawkridge has inherited a run-down property in Yorkshire from the reclusive Joseph Calver. To the delight of the locals, Sir Waldo, known as the Nonesuch for his sporting abilities, arrives to inspect the property, with his cousin Julian, Lord Lindeth, in tow. Julian’s escaping the efforts of his fond mother to see him rise to stellar heights in London society. He, however, prefers a quiet country life.

The locals are determined to make the most of these unexpected arrivals, and launch a season of outings and parties and general gaiety, with the less than subtle intention of securing one or both of the gentlemen for one of the local girls. Julian is instantly smitten by the devastatingly beautiful Tiffany Wield, while Waldo is drawn to her cool, composed and oh-so-elegant governess-companion, Ancilla Trent.

And so begins the dance. Waldo and Ancilla both, in their different ways, contrive to keep Julian out of Tiffany’s clutches, Ancilla by playing on Tiffany’s self-interest, and Waldo by manoeuvring Tiffany to show her worst, self-centred, temper-tantrum self in front of Julian. And this goes along so swimmingly that Tiffany decides to run away and recruits the equally self-centred cousin Laurence to her cause, a mistake of huge (and very entertaining) proportions.

All of this is delightful, and our two principals are merrily falling in love and on the brink of their happy ending, but naturally this wouldn’t be a Regency romance if two rational adults simply fell in love and got married, and so we come to the inevitable obstacle. Surely it can’t be…? But it is. Once again a perfectly decent story is mucked up with The Great Misunderstanding, of the sort that could easily be sorted out in two minutes if the hero and heroine just talked to each other.

Which is disappointing, but luckily the hero is a sensible man who doesn’t storm off in a huff or (as in some books) immediately betroth himself to some hideously unsuitable person. Instead, he keeps asking the heroine ‘Why not?’ every time she refuses him, by which means the matter is eventually resolved. Thank heavens for sensible heroes!

Despite the annoyance of The Great Misunderstanding, the rest of the book was overwhelmingly enjoyable, and it was all cleared up quickly so I’m not going to knock off a star. Plus I rather liked Waldo – one of the better heroes, I think. So, five stars.

2 responses to “Review: The Nonesuch by Georgette Heyer”