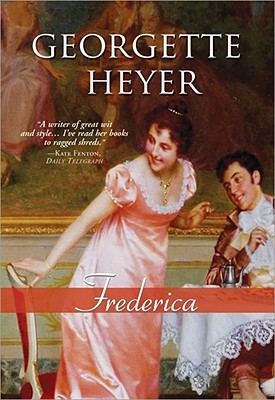 After a run of 5* Heyers, this one lost a star for a rash of silliness. Too many of her books depend for their climactic disaster on characters behaving in positively bird-witted ways, without an ounce of common sense, and so it is here. Fortunately, the hero and heroine rise above the foolishness, there’s a lovely slow-build romance going on, too, and the humour is as well-developed as always.

Here’s the premise: the Merriville family descends on London so that beautiful Charis can make her come-out. To ensure this, older sister Frederica calls upon a distant relation, the Marquis of Alverstoke, to help launch Charis into society. Alverstoke is a bored, over-indulged and selfish rake-about-town who is unaccustomed to lifting a finger, even for much closer relations, but the chance to infuriate his own sisters spurs him to agree to hold a ball for Charis, and his sisters’ daughters.

So far, so meh. Alverstoke is, at this point, an unappealing character, entirely self-centred, and Frederica isn’t much better, being an overly managing and verbose spinster, completely caught up in the affairs of her family to the exclusion of any other consideration. But luckily Frederica has three brothers, and the younger two, sixteen-year-old Jessamy and twelve-year-old Felix, are the glorious, and very funny, heart of the book. Felix is obsessed with mechanical devices of all kinds and is charming enough to succeed in dragging a very reluctant Alverstoke on a trip to examine a foundry, amongst other delights. Jessamy is trying to study to be a worthy clergyman, in time, but would really rather be out on horseback. And both of them have a great propensity to get into deep trouble, whereupon they promptly turn to Alverstoke for help.

And so, by very gradual degrees, Alverstoke learns to care for someone other than himself, and Frederica learns to depend on someone other than herself, and by even more gradual degrees they fall in love. We see this more clearly in Alverstoke, and I loved the careful way he protected Frederica from gossip by not paying her too much attention, and being very casual when he’s with her, so that she isn’t seen as merely the latest flirt of a confirmed rake. With the downside, of course, that she never quite realises his intentions and he never quite finds himself in a position to raise the issue.

This aspect of the book is faultless, but of course it wouldn’t be a Heyer without at least one silly ingenue. Here, it’s Charis who fulfils the role, aided and abetted by the handsome but equally empty-headed Endymion, Alverstoke’s heir. They manage to create the usual end-of-book crisis, which is fortunately resolved rather quickly here. An honourable mention at this point to Alverstoke’s secretary, Mr Charles Trevor, who creatively solves every dilemma, and a dishonourable mention for Lufra, the Baluchistan hound, who sadly turned out to be a mere plot device, for he was barely mentioned after his magnificent performance in Green Park. A good four stars. 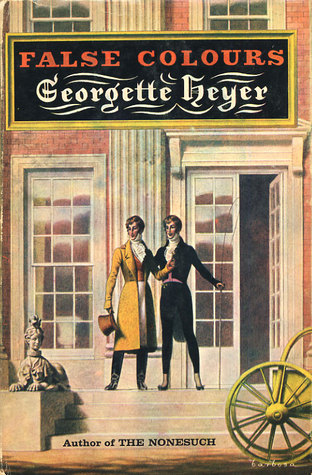 There’s something magical about an identical twin story, and this one is about as good as they come. Kit Fancot, as the younger brother, has taken up a diplomatic career. When he returns to England, he finds his brother Evelyn has disappeared, while on the brink of a very sudden betrothal. All the lady’s relations have been gathered to meet Evelyn, and to save his brother from embarrassment, Kit agrees to impersonate him.

He scrapes through the meeting and retires to the family estate to hide away until Evelyn turns up again, but the young lady’s formidable grandmother invites herself and her granddaughter to stay with them. This is a crisis, so Kit’s widowed mother invites some starchy relations and one of her beaux to join them. Thus begins one of the most awkward house parties ever, not helped by Kit and the young lady, Cressy, beginning to fall in love.

Of course Evelyn eventually turns up again, having fallen in love himself, and the brothers have to dream up some ingenious way to swap back their identities and pair up with their chosen ladies, without creating a scandal. The whole book is delightful, and one of the funniest Heyers ever. As with many of her tales, the principal characters are perfectly rational people, but the side characters are gloriously over the top.

Lady Denville is clearly based on the outrageously extravagant Duchess of Devonshire, completely dippy about money but so charming that nobody ever minded. Well, except her late husband, who was a hard-nosed sort of bloke and gave her a rotten time. Sir Bonamy Ripple, her vastly overweight but very wealthy admirer, is no doubt based on the Prince of Wales, or Prinny, himself. These two, and the formidable grandmother, provide most of the entertainment, and the dialogue is utterly brilliant. The scene where Lady Denville persuades perpetual bachelor Sir Bonamy to marry her is masterful.

Naturally all’s well that ends well, everyone ends up with the most suitable partner (yes, even Sir Bonamy!) and scandal is averted. Five well-earned stars.

Silver Linings Mysteries: A ship sinks off the Cornish coast, with the loss of many lives. But every cloud has a silver lining… A new series of six books. Books 1 to 5 are now out, and book 6 is available to pre-order.