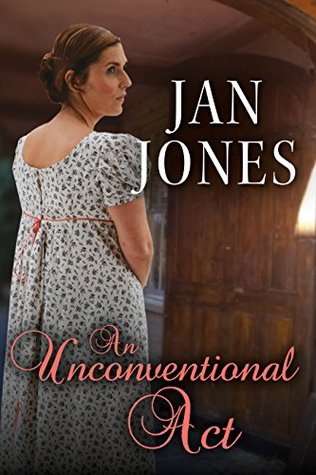 I’m torn on this one. On the one hand, I enjoyed it enormously and found myself picking up my Kindle to sneak in an extra chapter when I should have been doing other things, always a sign of a book that has its claws in deep. On the other hand, it veered from implausible but let’s go along with it right over the edge into eye-rollingly incredible at times. The villain was too villainous, the danger too ever-present, the hero too heroic, the heroine too resourceful and the dramatic climax too melodramatic for words. And don’t mention the oh-so-convenient key.

The premise: our heroine, Jenny Castle, is running away from her wicked cousin who’s just inherited the estate and is determined to have the full value from it, including Jenny’s share, by fair means or foul. She seeks refuge with the travelling theatre company seen in a previous book, run by Adam Prettyman. Adam’s wife, Mary, has recently died, leaving him with two young children and a heap of financial worries. Jenny has been sent by a mutual friend to help out with both problems, by governessing the children and keeping the company’s accounts. For various unlikely reasons, Jenny, Adam and the children end up sharing sleeping quarters.

So far, so implausible, but whatever. I don’t mind some artistic licence in the initial setup, and it does make it screamingly obvious where the romance is going to come from. Jenny and Adam are cautious of each other, but as time goes by they learn to trust each other. She’s clever with the numbers (of course she is) and brilliant with the kids (of course she is), and he’s brilliant about organising the plays and the logistics of packing up and moving around. I’d guess he’s dyslexic (or the number equivalent) since he’s hopeless with numbers but so good about 3D spatial stuff.

But it wouldn’t be a Regency romance if two people who liked each other a bit just rolled along the road to matrimony. Oh no, there have to be Serious Obstacles. In her case, it’s the whole being-chased-by-the-wicked-cousin thing, which she’s neglected to mention. In his case, it’s a past history of uncontrolled temper and violence, which he’s also neglected to mention. So they have to work through their differences and Reveal All before they can move forward.

Now, none of this is uninteresting, but it also isn’t a particularly original story and the characters aren’t quite strong enough to lift the ordinary story that extra notch upwards to make it extraordinary. Jenny is a perfectly nice, sensible and courageous woman. Adam is a normal sort of bloke. Both of them have talents. Neither of them is interesting enough to be unforgettable.

One opportunity to raise the book a level was wasted, in my view. There’s a significant sub-plot involving slavery, and the book is set at a date when slavery was illegal in Britain and slave trading was illegal in the British Empire. Nevertheless, slavery itself was still widespread in many places and many British families drew their wealth from slave-worked plantations. So although Britain was edging into the complete abolition of slavery, the question was still controversial. It would have been interesting, I think, to have heard something of the views prevailing at the time, that is, some explanation of why slavery was considered so necessary. Even a line or two to suggest that there was more than one opinion would have been good. But instead, the modern view is assumed to be the only right one, any other opinion is shocking, and the reader is left to wonder what real Regency people actually thought, and why they did what they did.

This sounds more negative than I intended, but actually all these points are relatively trivial. The author’s talent shines through, and although I didn’t enjoy this quite as much as the previous book, it was still a fine read, and a good four stars.