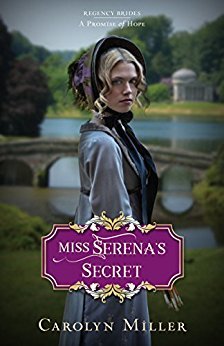 This was a difficult book for me to rate. On the one hand, it’s well written, it feels realistically steeped in the Regency era and I was definitely rooting for the two lovers. But on the other hand… boy, was it slow, and the on again/off again between the protagonists got old really quickly. I much prefer a couple who know their own minds and go after what they want, rather than a lot of existential angsting.

So this follows directly after the first book in this series, Winning Miss Winthrop, so we get to see our happy couple from last time around billing and cooing, holding hands under the table, gazing lovingly into each other’s eyes and generally behaving in twenty first century ways. Well, whatever. Some readers like that, but personally I prefer my Regency characters to behave like proper Regency characters and not display affection openly.

This time around, the lead characters are the sister and friend of the previous couple. Serena is the cool as ice, just out of the seminary young lady with artistic talent. Harry is the ne’er do well heir to an earldom, with roguish charm and tendencies towards mistresses and gambling. There’s a lot of strait-laced disapproval of poor Harry from his family, his friends and from Serena, all of which got on my nerves rather. He doesn’t seem to have stepped beyond the normal bounds for a young man of means in that era, so although I can understand that his family wanted him to settle down, it seemed a bit much to regard him as unredeemable. Especially when he’s so charming (yes, I confess I have a thing for roguish charm, and Harry’s very funny with it, always a plus).

For various implausible reasons, the two are thrown together at Harry’s family home in Derbyshire, and for even more implausible reasons, Harry is told not to exert his considerable charm on Serena. But naturally they begin to fall in love anyway, and why not? She’s a young lady of breeding and good family, he’s the heir to an earldom and (despite all the posturing about his reputation) he’s extremely eligible. So the author’s ingenuity is tested rather to find ways to keep the two apart. Serena has both an unfortunate previous encounter with a male tutor at her school, which has put her off men, plus a medical condition. Harry has a former lover amongst other problems, but none of this is insuperable if people would just talk to each other, instead of stoically putting up with things in silence. And as for the whole shenanigans with the painting at the exhibition, it just seemed over the top to me.

Both the main characters seemed too driven by the opinions of other people. Serena was very contrary, not making any protest about her art master’s behaviour, then giving in too readily to the idea of exhibiting her painting, even though it must have been obvious there would be problems. And at other times, she was quite determined to do her own thing. Harry seemed weak at times, and needed regular chats from his friends to stiffen his backbone. I could see what the author was trying to achieve, but her efforts to bring drama to the plot often served only to weaken her characters.

However, the book is well written, Serena’s artwork is very well described and it will appeal to anyone who likes a slow-building romance with lots of (minor) obstacles for the characters to angst about. The Christian theme is less intrusive than in the first book. But for me, the contrivances of the plot and the dithering main characters keep this to three stars.