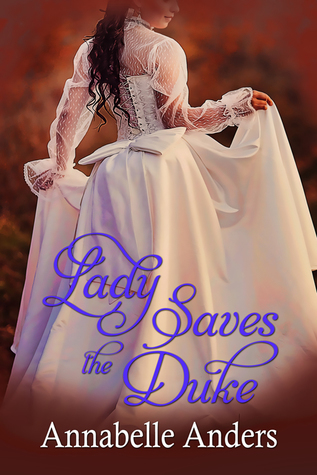 I loved this book. It made me laugh, it made me cry, and for all the right reasons. It’s riddled with silly anachronisms and Americanisms and (shock, horror!) I didn’t mind a bit because it was so much fun to read.

Here’s the premise: our heroine Abigail is dwindling into spinsterhood after her only season in London went disastrously wrong. Her mother hasn’t quite given up on her, however, and wheedles her a place at a stylish house party, where she encounters the tragic figure of hero Alex (who’s a duke, naturally), whose wife and children died in an accident. They don’t seem to have much in common, until a wardrobe malfunction and a chance meeting in the library at night upends both their lives. Abigail is ruined again, and the duke has to make things right. Or he could marry her…

I liked both the main characters. They felt believably three-dimensional, especially given their personal histories. So many authors throw in a past tragedy to draw reader sympathy and attempt to give a character depth, but it rarely works. Anders, however, is a strong enough writer to pull it off, and the internal thought processes of Abigail and Alex, and their conflicting emotions, were very convincing.

There’s only one part of this book where, for me, the plot logic failed. Abigail’s decision to go for a midnight stroll around a house full of men, especially given her history, defies all common sense. And then, meeting Alex in the library, why on earth did she not simply run back to her room? But it’s an essential part of the plot that brings them together, so I’ll let it pass.

From then on, the whole story works wonderfully, and if there are a few over the top moments (Abigail getting to church, for instance), they never strayed from amusing to absurd. As a marriage of convenience story, with the two protagonists inching towards a working arrangement and then (surprise!) to love, this one is hard to beat. But be warned, the sex scenes are moderately graphic, so if that’s not for you, this one’s best avoided. It’s not perfect in the historical accuracy department, by a long chalk, but it was so well-written that it got a pass from me (something that hardly ever happens). However, if gotten and fall and so on will push your buttons, then avoid. For me, it’s a rare five star.