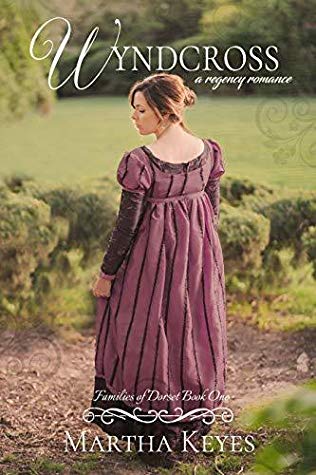 It’s a rare day when I find a new author I can rave about, but here we are. Martha Keyes’ first full-length Regency romance manages to tick all the boxes – engaging characters, believable situations and a truly authentic setting. The dialogue is sparkling with wit in the best tradition of Georgette Heyer, and the characters all speak and behave in a credibly Regency manner. Awesome.

Here’s the premise: Kate Matcham is in a difficult situation. Her father died trying to stamp out smuggling in Dorsetshire, and her mother remarried a man in trade. Kate’s spending most of her time with her widowed aunt in London, but she’s aware that, with younger sisters growing up, she’s expected to marry well. Her options are limited, though – a marriage of convenience, an offer of a less savoury sort, or the slight possibility of a fortune from her less-than-respectable step-father. She doesn’t want any of them. But then she receives an unexpected invitation to stay with a childhood friend very near to her old home. The only problem? The charming young man she finds herself falling for is earmarked for her friend.

I adore a character who makes me laugh, and William, the aforementioned charming young man, has the most glorious sense of humour. He brings out the best in Kate, and their verbal sparring matches are a delight. There are some other fun characters, too, and (with a couple of minor exceptions) the bad guys are not so much wicked as flailing about trying to do their best, albeit in a fairly misguided way.

The smuggling subplot is not an original one, and the resolution there was fairly melodramatic, but it never felt outrageously contrived and the characters behaved (on the whole) in keeping with their characters. I say ‘on the whole’, because I got a bit twitchy about William keeping Kate in the dark, especially when it’s clear at this point that he’s in love with her. Knowing her history and character, and knowing how dangerous the situation was, not telling her put her at great risk. I would have liked a bit more passion from him, too, especially at the end when they’ve been through some difficult times together. Sweeping her into his manly arms wouldn’t have gone amiss at that point. Sometimes Regency restraint can be carried a tad too far!

As for Kate, she did a great deal of agonising and it took her a long time to realise what was going on with William, both on the smuggling front and emotionally. There’s that Regency restraint again. I’m not a huge fan of hand-wringing heroines, but with Kate it was very understandable, given her background and her presumed unsuitability to marry William, who is the heir to an earldom. But when the two of them did finally manage to set aside that pesky Regency restraint for five minutes and sort themselves out, it was well worth the wait.

On the historical accuracy front, I have virtually nothing to grumble about. The only Americanisms I spotted were a couple of gottens and one or two times Kate gazed ‘out the window’. There were a couple of anachronisms. ‘Empathy’ was first recorded in 1895 and ‘surreal’ in 1936. Trivial stuff. In every other way – dialogue, manners, setting – the author’s grasp of the Regency is very assured, and the wit and sparkle that flies between Kate and William reminded me very much of Georgette Heyer. A wonderful read, highly recommended. Five stars.