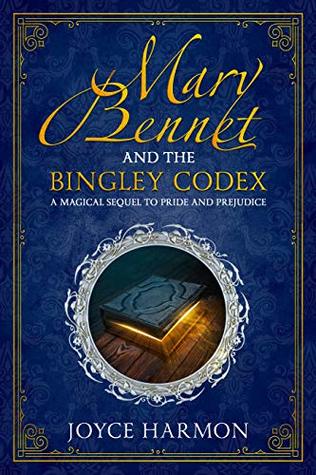 Well, this was a whole heap of fun! A Pride and Prejudice sequel with a little light magic thrown in.

Here’s the premise: Jane and Bingley have been married for about a year, and have settled in an estate in Cheshire. After a visit to Longbourn, they take bookish Mary Bennet back with them where she discovers their enormous library and some very peculiar books…

If you always thought there was more to Mary Bennet than meets the eye, this is the book for you. This is not the Mary of P&P, the rather peevish girl who practiced her music and studied books constantly but played very badly and displayed no understanding gleaned from her learning. That was Mary seen through the cynical eyes of her sister Elizabeth. But this is Mary’s own story, and since we’re privy to her inner thoughts, she turns out to be surprisingly intelligent and self-aware and even manipulative at times to get what she wants. I liked her very much.

The middle part of the story got a bit slow, since it was largely about Mary being taught some magical precepts by a pair of mentors. I thought of it as the Harry Potter section, where Mary sort of goes to magic school. If you like your magic explained to you in depth, you’ll enjoy this very much, but I far preferred Mary’s own experiments, or anything where things were happening, rather than sitting around in the library talking. But once Caroline Bingley arrives on a husband-hunting mission (not that she’s being typecast, or anything…), and a suitor emerges for Mary the pace hots up a bit, and then it’s all downhill for the dramatic ride to the finishing line.

I didn’t spot the villain, but then I never do. I’m constantly surprised when that really nice, friendly character turns out to be an evil so-and-so. The resolution was very neatly done – a satisfying comeuppance. And Caroline Bingley gets a gentler resolution than perhaps she deserves.

There’s no romance at all in Mary’s life, at least not in this book. Since this is the first of a series, I’m optimistic that she’ll meet a charming and handsome young wizard somewhere on her adventures. A pleasant, easy read, with an unexpectedly congenial Mary Bennet, totally canonical Jane, Bingley and Caroline, and some interesting side characters. Four stars. I hope it won’t be too long until the next book in the series.