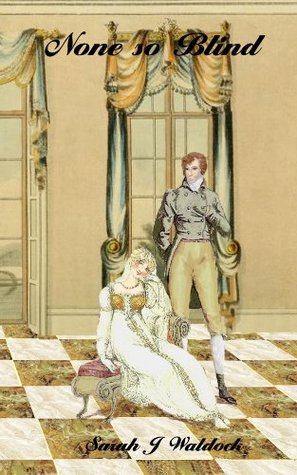 This is a new author to me, recommended to me by one of my readers, and this book is a delight. The heroine is spirited and intelligent, the hero is charming and gentlemanly, the villain is suitably horrible and the story unwinds entertainingly. And this is a story with a difference, for Penelope is blind, having succumbed to measles as a child. Her siblings all died, but she survived and is determined not to let her blindness hold her back. So off she goes to London to have her season, and good for her.

The hero, Guy (Lord Shawthorpe), newly returned from overseas to claim his barony, is that staple of the Regency romance, the rake and all-round bad boy who actually turns out to have had one or two flings in his youth, but is now settling down with reformist fervour to manage his estate. After a wobbly first meeting with Penelope, he transforms into the perfect gentleman, and from then on the romance runs on predictable rails, with only that overworked obstacle, the Great Misunderstanding, to keep them apart. They both think the other isn’t interested, and in her case, there’s some justification for it, since she has no access to facial expressions to clue her in. She has to work entirely by words, and it’s easy to see how, in the polite society of the Regency, where showing any kind of emotion is terribly bad form, the nuances of attraction might be lost.

On the plus side, Penelope’s blindness, and the balancing intensity of her other senses, is beautifully employed as an integral part of the plot. She can’t see the faces or gestures or clothing of her numerous suitors, but she can judge them very well by their voices, their words and how well they adapt to her lack of sight. But ultimately, it’s their opinions and attitudes that sink them and that’s exactly as it should be.

This is, thankfully, one of those books where the reader is in no doubt of being in the Regency. There are no anachronisms, errors of title, twenty-first century informality or incorrect behaviour. One nice touch is that Penelope’s grandma, having been raised in the more robust Georgian age, frequently lapses into language that’s far saltier than the mealy-mouthed Regency. There’s a wonderful sense of history, as the characters discuss the fashions of earlier times, and there’s an amusing discussion as to whether the pleasure for men of wearing a swirling cape outweighed all the lace and frills of the Restoration era. But my favourite character by far is Guy’s ex-sailor manservant, who uses nautical slang everywhere, describing a ball as ‘fleet manoeuvres under full sail’, which is quite delicious.

The plot gets fairly silly towards the end as the villain becomes cartoonishly more and more outrageous, and sadly the romance is settled in a slightly perfunctory manner on the very last page, although as this is very much in the spirit of Georgette Heyer I can’t complain too much. My only real grumble about the book is the terrible editing. There aren’t many outright typos, thankfully, but wayward punctuation, comma splices and poor formatting should have been addressed by a final proof read. Had those errors been less egregious, I’d probably have found this a five star read. Even so, I highly recommend this to anyone looking for a well-written, true-to-the-era traditional read with no bedroom scenes. Four stars.