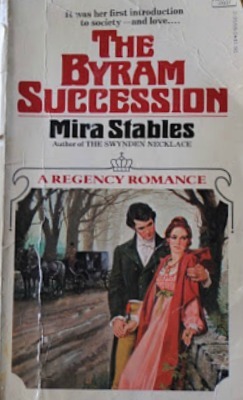 After the success of Stranger Within The Gates, I moved straight on to this one, to find a very different but equally enjoyable tale. The premise is an old one – two cousins doing the season, one a raving beauty, the other passable. One a fashionably ninny, the other more thoughtful. One a spoilt, spiteful brat, the other a pleasantly-mannered girl. Well, she’s the heroine, so of course she is. But Thea has something often lacking in such heroines – an unexpectedly acquired and rather large fortune. But, as is the way in Regency romances, the fortune is not to be mentioned to avoid the dire prospect of fortune hunters. The fact that this also deters otherwise respectable suitors, like the impoverished heir to a dukedom, is never considered.

The said heir to the dukedom isn’t terribly impoverished (it’s hard to dissipate a dukedom-sized fortune), but his parents would like him to marry some money all the same, to replenish the family coffers. So when he comes across an accident on the road, and helps a self-possessed young lady to rescue the fallen curricle driver and the injured horse, he’s politely interested in her but not enough to consider her for the role of future duchess.

He is himself the interest of the above-mentioned spoilt brat, Tina, who has decided it’s her destiny to be a duchess and so sets out to cajole, entice and charm Lord Skirlaugh, and when that doesn’t have the desired effect, she resorts to scheming and plotting instead. This makes a nice change from the wicked cousin trying to improve his chances of inheriting, which seems to be the commonest Regency villain. Tina isn’t actually wicked, she’s simply self-centred and oblivious to the consequences of her actions.

I liked both Skirlaugh and Thea. He’s a bit cynical, and sensitive about his facial scars (are they a war wound? I don’t remember). She’s refreshingly different from the usual society debutante, and their romance felt nicely believable. The ending is a little bit contrived but by that point I was so invested in these two that I didn’t mind. A well-written story with the ring of Regency authenticity about it. My only (very mild) grumble is that I don’t know Lord Skirlaugh’s exact rank. As the heir to a duke, he’s likely to be a marquess, but it’s never said explicitly. Highly recommended for those looking for a solid traditional read. Five stars.