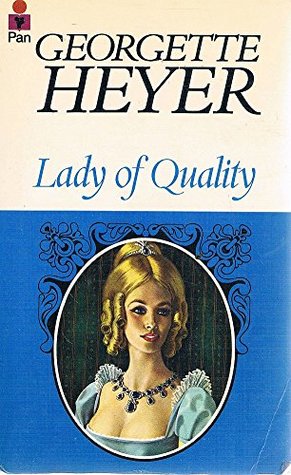 The very last book in my project to reread all Heyer’s Regency novels in the order they were written. This is very far from her best work, and sadly it’s actually a rehash of what I personally regard as her most entertaining book, Black Sheep, but with far less likable protagonists, less humour, and a much sketchier plot. Even so, I found a lot to like about it.

Here’s the plot: Annis Wychwood is beautiful, rich and determinedly single at twenty nine. While returning to her Bath home, she happens upon a broken-down gig, and offers help to the young lady stranded at the side of the road. Lucilla is running away from an arranged marriage – with the equally reluctant bridegroom, Ninian, who nobly offered to see her to safety. Annis offers Lucilla a temporary home and sets about finding suitable amusements for the girl. Lucilla may be an orphan, but she isn’t unprotected, and her uncle and guardian, Oliver Carleton, the rudest man in London, arrives to sort things out.

The two are immediately at loggerheads, and most of the humour in the book comes from their spirited exchanges. I think this was meant to be a collision between the perfect manners of the lady of quality versus the complete lack of manners of the gentleman, but since she was often almost as rude as he was, it didn’t work too well. There was also a great deal of rehashing of the current state of play of the various side characters (a problem with Charity Girl, as well), which drags everything down to a snail’s pace, and, quite frankly, nothing very much happens very slowly anyway. Nevertheless, the book was short enough and funny enough that I didn’t mind it.

The romance is, fortunately, one that builds from the moment the two protagonists meet, which for me is far better than being bolted on as an afterthought. It wasn’t a completely convincing romance, because they seem rather a mismatched pair, but I won’t quibble over that. The side plots were pretty silly, and the resolution even sillier, but that’s a classic Heyer strategy. On the whole, Black Sheep does it far, far better, but it was still an amusing and (mostly) charming read, I liked Maria Farlow’s long, rambling monologues, the ingenue and young buck (Lucilla and Ninian) were not in the least stupid, and I very much enjoyed Annis’s sister-in-law, who was thrilled when the household succumbed to sickness and she was able to spend all day caring for her baby. A lovely woman. Four stars. 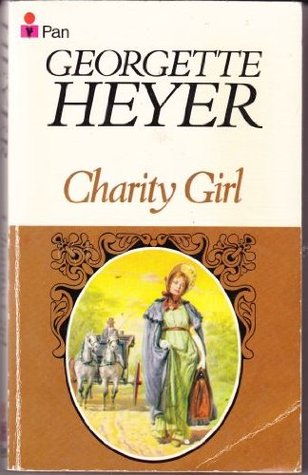 This was a disappointment. Partly because I’ve read this story before- twice! Both The Foundling and Sprig Muslin feature a man chasing round the countryside on behalf of some naive ingenue in trouble (generally self-created), while the romance is a perfunctory affair, more or less ignored until the last chapters. And whereas those books displayed all Heyer’s trademark sparkling wit and amusing side characters, this one was just plain dull. Apart from the opening chapter and a few moments in Harrogate, there was nothing much to raise even a wry smile.

The premise is that Miss Charity Steane, or Cherry for short, has been seemingly abandoned by her ne’er-do-well father, and when her school bills aren’t paid, she is taken in by her aunt as an unpaid drudge, the lot of poor relations everywhere. Cherry decides to run away to her grandfather in London but on the road she is rescued by Viscount Desford and whisked off in his curricle. But there’s a problem: her grandfather is away from home, no one knows where, and Desford clearly can’t take care of the girl himself. What to do, but dump her at the home of his oldest and best friend, Henrietta Silverdale.

And so the plot plays out with our hero and heroine, Desford and Henrietta, hardly ever in the same county, never mind the same room, as Desford traipses here and there after grandpapa, Henrietta tries to keep Cherry on a short leash and both of them have to avoid ending up betrothed to the wrong person. It all comes right in the end, naturally, but boy was it a dry and tedious road to travel. I really do not like a romance where the couple have no inkling of their own feelings until nudged into it by their more knowing friends and relations, whereupon they suddenly discover they’re passionately in love. It just isn’t convincing. One of very few Heyers that I found a real struggle to get through. Three stars. 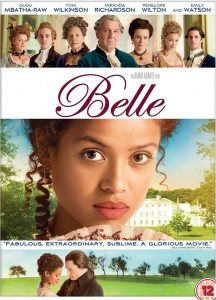 Such an interesting film, and one I was drawn to purely for its research potential, but ended by finding a great deal more. It isn’t entirely satisfactory, sacrificing historical accuracy to dramatic storytelling, but it was nevertheless very enjoyable to watch, and superb in both acting and the lush visual presentation.

The most fascinating aspect for me was that this is based on a true story. The film is inspired by the 1779 painting of Dido Elizabeth Belle Lindsay beside her cousin Lady Elizabeth Murray, at Kenwood House, which was commissioned by their great-uncle, William Murray, 1st Earl of Mansfield, then Lord Chief Justice of England. Very little is known about the life of Dido Belle, who was born in the West Indies and was the illegitimate mixed-race daughter of Mansfield’s nephew. She is found living in poverty by her father and entrusted to the care of Mansfield and his wife, who raised and educated her alongside Elizabeth, and in exactly the same way. Needless to say, Dido’s colour and illegitimacy create tensions within the family, for instance, when she is not allowed to dine with the family when they have guests but is allowed to join then in the drawing room afterwards.

It was interesting to me to compare this even-handed upbringing with the way Fanny was raised in Mansfield Park. In Austen’s work, Fanny was very much the poor relation, despite being the niece of a baronet, and not only treated as such, but expected to know her place. Dido, by contrast, seems to have been treated as an equal, yet when her father dies and leaves her his fortune, there’s a stark contrast between the two cousins. Both have respectable family connections, but Elizabeth, despite being poor, is expected to make a good marriage, whereas Dido, who is rich, has no expectations because she is mulatto (mixed race) and illegitimate. 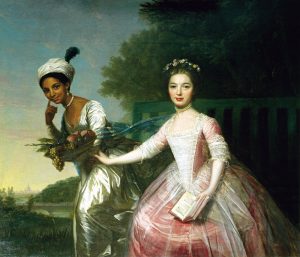 The romance isn’t entirely satisfactory, but that’s partly because Gugu Mbatha-Raw, who plays Dido, is something of a blank slate. She’s very lovely, of course, and the costumes show her off to glorious advantage, but she lacks something of the nuances in her performance, so that it’s often hard to know what she’s feeling. I was never terribly clear, to be honest, as to why she became engaged to Oliver Ashford. It’s presumed to be the result of bowing to the conventional wisdom that a woman needs a man to take care of her (and her fortune), but happily she breaks free of this in time for a resolution with clergyman’s son, lawyer and political campaigner John Davinier.

The running theme of slavery, and Lord Mansfield’s verdict on a famous case threads through the whole film. It treads a fine line between the sentimental (Mansfield affected by a dearly-loved mulatto in his own household) and the commercial (the value of slaves as a commodity), and I feel it succeeds pretty well, despite the film’s attempts to over-dramatise what would undoubtedly have been dry legal discussion.
An enjoyable film, not complicated, but beautiful to look at and with some stellar performances from the usual array of talented British actors in side roles.