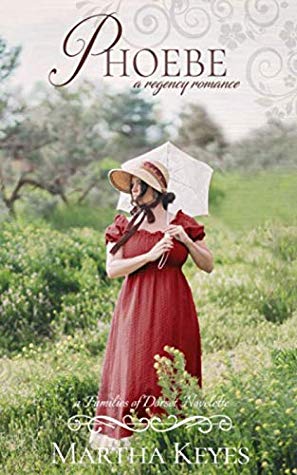 A short and sweet free story from one of my new favourite authors. Phoebe is awaiting the return of the man she loves from his tour of the continent. Without a formal betrothal, she wasn’t able to write to him, but every day she wrote a line or two in a year-long letter. Now she awaits his arrival at a ball, with the letter heavy in her reticule. But before he appears, she overhears dreadful news – he’s enamoured of a woman he met he France. So when she finally meets him again, to save her pride she makes up an attachment to another man.

And so the stage is set for a story that’s based entirely on that time-honoured plot, the Great Misunderstanding. We know this because we can see inside the head of lover George, and know that he’s stayed faithful to Phoebe and he’s bewildered and hurt by her seeming defection. Fortunately, Phoebe’s sensible enough not to let George leave again without at least showing him her letter, and the story is short enough that matters get resolved speedily.

I have some very minor quibbles. I’d have preferred the letter to play a bigger role in the resolution than it did, purely for the symmetry, and I felt there was too much explanation at the end of things which the reader already knows and don’t need to be spelt out. There would have been more tension, too, if we hadn’t known exactly what George was feeling. But the romance ended beautifully, and the writing is excellent, as always. Four stars.