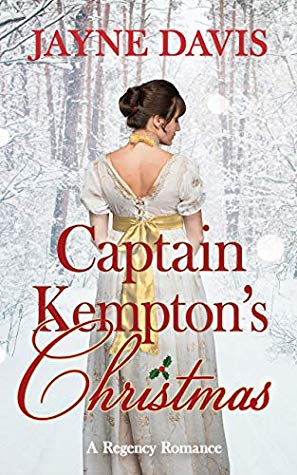 My second Christmas novella on the trot, and it’s another good one, and (surprise!) another second chance romance. I still don’t really get the whole Regency Christmas thing, and would have enjoyed the story just as much if it were set in midsummer, but whatever.

Here’s the premise: our hero and heroine meet and fall in love one summer, but there’s no time to formalise things. He’s a naval lieutenant, and is called back to his ship after only a fortnight. He asks her to wait for him, and she agrees, but… the next he hears, she’s married someone else. Several years later, they meet up again at a Christmas house party. He’s now a captain and she’s widowed, but naturally things aren’t that simple. He’s resentful and jealous of her husband, and she’s just about given up hope of a reconciliation. And so they dance around each other, being stiffly polite and really, I just wanted to bang their heads together. Would it be so hard for him to ask about her husband? Would it be so hard for her to unbend a little?

There were a fair few flashbacks in this as the story gradually unfolds, and although I thought the characters weren’t perhaps quite as sensible as they might have been, there were reasons for their hesitation (villainy ahoy!). I liked both hero and heroine, her reasons for marrying were excellent and the ending was terrific. As always with this author, the Regency feel was spot on. A good four stars.