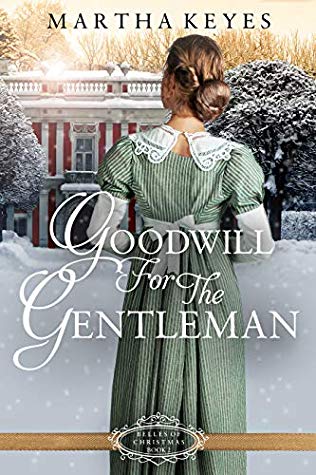 A lovely second-chance romance by one of my new favourite authors. I’ve never quite understood the appeal of Christmas romances, especially in the Regency which really didn’t make a big deal of the holiday season (it became huge in the Victorian era) but the author makes a convincing case for it here, since the heroine has German ancestry and therefore has the whole Christmas tree tradition. With or without the Christmas tree (with naked candles! Yikes! Mr Health and Mr Safety would NOT approve!), the whole snowed-up setting works perfectly for this particular story.

The premise is that eldest son and heir Hugh Warrilow was expected to marry the neighbours’ eldest daughter, Lucy Caldwell, but he disgraced himself by jilting her and running off to join the army. Now, three years later, he’s returned home, determined to set matters right and try to forget the reason for the jilting – that he was in love with Lucy’s sister Emma. For her part, Emma will never forgive Hugh for what he did, and now they’re snowed up together at his home…

There’s nothing unexpected about this story which unfolds delightfully. Both Hugh and Emma were perfectly believable and sympathetic characters, and their gradual rapprochement was a joy to watch. I loved the sledges in the snow, and also the parlour game snapdragon (a new one to me). I felt there was rather too much angsty backstory squeezed in, what with the war widow, the survivor and the brother’s betrothal issues, but that’s not really a complaint because they all serve to increase Hugh’s guilt. I would have liked, too, for Hugh himself to have confessed all to Emma, instead of leaving it to others to enlighten her, but again, not a complaint.

A couple of very trivial niggles. When Hugh comes home unannounced, there are no servants to greet him and he carries his own luggage into the house and simply walks into the dining room. I found that a real stretch. There would at the very least have been grooms or kitchen staff around, and where was his valet or batman? And then he sits down to join the others for dinner, a place already set (they were psychic!) and without changing out of his travel-stained clothes into evening dress. Um, no. Also, one character is described as a ‘country barrister’. Barristers are the top-ranked lawyers, who put the case in the highest courts, so they’re based in the cities. A country lawyer would be an attorney, whose work is the boring transfer of bits of land or flocks of sheep. Totally trivial niggles, which didn’t spoil my enjoyment at all.