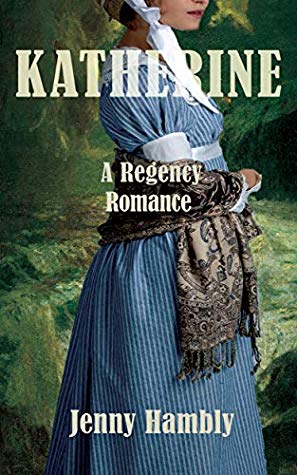 This is the third book by this author, and it’s another assured and enjoyable read. Heroine Katherine is a calm and sensible woman, and hero Harry is an irrepressible rogue, and if this is a little more conventional an outing than Rosalind and Sophie, that’s not a problem in the slightest.

Here’s the premise: Katherine’s brother, for whom she’s kept house for several years, has recently married and Katherine’s feeling a bit in the way of her rather crotchety and newly pregnant sister-in-law. She accepts her brother’s commission to travel to a neglected part of his estate to restore it to order. The house, Helagon in Cornwall, is not quite falling down, but needs more work than she’d foreseen. A tricky problem. Meanwhile, wild boy Harry, Viscount Treleven, has returned to his former home after five years in exile, determined to be a good landlord and settle down just a little. Needless to say, these two find themselves unwilling and somewhat antagonistic neighbours…

I liked Katherine very much. Her awkward position, having her role as mistress of the house usurped by the new wife, who naturally wants everything her own way, must have been a very common one in Regency times, and most women didn’t have the option of another estate to run away to. Most such women would have simply dwindled away to become the poor relation, or else hastily accepted the first suitable offer, so Katherine is lucky to avoid those fates, but her position is still a difficult one. Even when Helagon is fully restored, it would be considered quite odd for a single woman to live there, even with a companion for respectability. But Katherine doesn’t dwell on her future, throwing herself into the business of renovation with practical spirit, as with everything. Her first meeting with Harry is very much in that vein, after he has seemingly been shot by a poacher and she briskly deals with his injury.

Harry isn’t quite the lighthearted flirt he appeared to be in the previous book, where his humour lightened the tone considerably. That’s inevitable, perhaps, in the book where he meets his match and the roguishness has to give way to more serious considerations. There’s also his duties as landlord, especially one who’s been absent for some years, to weigh him down, and a neighbour who isn’t as friendly as he might be. However, I did miss the lightness just a little.

Of the side characters, I particularly liked Harry’s younger sister Henrietta, painfully shy and recovering from a not very enjoyable London season. Katherine’s advice on the proper management of flirtatious comments was one of the highlights of the book. Lord and Lady Hayward were fun characters, too. The villain is dealt with with suitable panache.

There’s nothing terribly unexpected in the way the story unravelled, but it was a fine read nevertheless, and I liked Harry’s scruples at the end – realising that his history as a flirt meant that he had to be absolutely sure of his own mind before speaking. A good four stars.