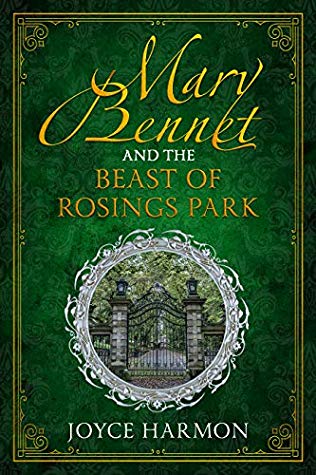 I love this series so, so much! After the Bingley Codex and the Wickham Artifact, now we have the Beast of Rosings Park, and although it doesn’t quite have the punch-the-air awesomeness of the previous book, it’s still a terrific outing for our Pride and Prejudice bluestocking with surprising hidden talents. The premise is that bookish Mary Bennet has discovered that she has magical abilities, and has been whisked off to London and the basement of the British Museum to be trained to use her new abilities. Anyone who always suspected there was more to Mary than met the eye or who likes a little magic in their Regency, this is the series you’ve been waiting for.

After her efforts at the end of book 2 (Jupiter Bennet!!! That made me laugh so hard), Mary is recovering at home from her overdose-of-magic induced infirmity, because magic always has a cost. The story is that she caught Amazonian Fever from an artifact at the British Museum, and there’s a delightful moment when the local doctor is fascinated by her previously unknown illness and wants to research her and write the details up for his fellow medics. It’s a challenge for Mary and her magician minder, Mrs Courtland, to put him off. I love these little touches of realism.

After a stay with the Bingleys in book 1, and then with the Gardiners and Wickhams in book 2, here we are at Hunsford parsonage with Mr and Mrs Collins, and the irrepressible Lady Catherine de Burgh. The author keeps these characters fairly close to their P&P characters, but, as with Mary herself, there are some characters that are not quite as per the book, including Anne de Burgh and her governess/chaperon, Mrs Jenkins. I loved the way they were developed, but I won’t spoil the surprise by giving anything away. There’s an array of minor characters, too, and now that Mary has a sizable dowry (courtesy of the Prince Regent after the book 2 incident), she’s surprisingly popular. Her illness prevents her from dancing, but luckily her health improves enough to see her scampering about the countryside well before the end of the book, so that she can participate in monster-hunting expeditions. I’m also not going to say anything about the monster. This unravels in a slightly more predictable way than in previous books, but it was still fun, and gave Mary the opportunity for some creative magic.

In the last book, there were teeny tiny hints of a romantic future for Mary with a certain handsome young lord, and I was thrilled to see him turn up again here, even though the romance really isn’t progressing very fast. No, let’s be honest, it’s not progressing at all. Sigh. Still, I’m optimistic. Book 4, the Shades of Pemberley, may possibly be the final book of the series, so fingers crossed for a happy ending for Mary. I can’t wait.

For anyone expecting Austen-esque writing or a strict adherence to canon, this book probably isn’t for you, but for anyone else, it’s delightful and I highly recommend the whole series (which should probably be read in order). Five stars.