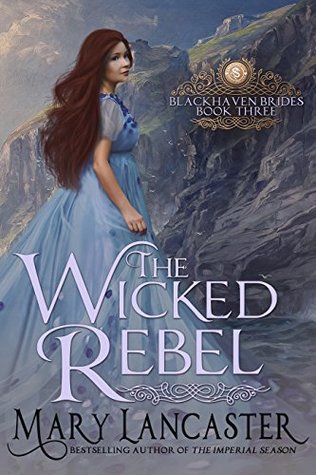 Mary Lancaster has rapidly become one of my favourite authors, with her witty and jolly romps in the emerging spa town of Blackhaven. This is the third in the series, and continues the trend of likable heroines, sexy and slightly bad-boy heroes, and a nicely crafted plot.

Here’s the premise: Lady Arabella Niven is the last remaining unmarried daughter of a duke, a gentle soul who would love to retreat to an isolated cottage somewhere and write books, but is being pushed into marriage to a portly old gentleman very much against her will. Her health is uncertain so she’s been sent to Blackhaven to take the waters, along with two aunts who fuss and fret her half to death. In a bid to find just an hour or two’s freedom from harassment, she takes a small rowing boat out into the bay where she spots a man apparently drowning. Rowing fearlessly to the rescue, the man emerges, totally naked, from the water and climbs into her boat. And so begins a most unlikely romance between a duke’s daughter and a smuggler. Or free trader, as Alban likes to call himself.

The author is not one to leave a romance to build slowly, so there’s an instant attraction between the two, and a dilemma for both of them. Can she walk away from the pressure of her family’s expectations? Can he, as an outlaw, risk an entanglement with such a high-ranking lady? And there’s a certain amount of family history lurking in the background. It’s problematic. And as they gradually try to determine what they want from the future, the past catches up with them and puts various people in jeopardy.

This is another fun read, with no real surprises along the way, and a certain amount of stupidity on the part of both hero and heroine (him in leaving two defenceless children in the care of people who have already proved they can’t be trusted, and her in allowing herself to be manipulated, even when she knows very clearly what she wants). But (surprise!) it all works out happily in the end, the bad guys get their comeuppance, our romantic pair get together and everybody else gets put in their place.

Terrific fun, lots of humour, a great romance. Lady Arabella in particular is beautifully drawn, a woman who is too timid to stand up to her domineering family openly, but smart enough to thwart their will in a thousand quietly subversive ways. She knows very well what she doesn’t want (an enforced marriage to an uncongenial man) but it isn’t until she meets Alban that she discovers what she actually wants, and the backbone to reach out and take it. I liked her very much. She totally deserves a hot bloke like Alban. There’s a fair amount of lusting and passionate kissing, and one sex scene. Five stars.