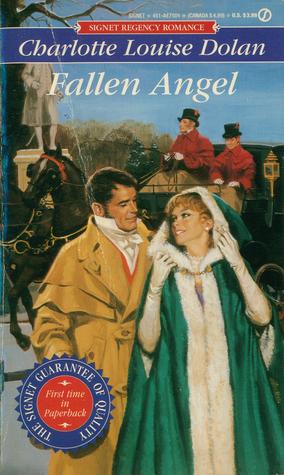 [Note: first published 1994] I should have hated this. The heroine is a downtrodden and meek young woman who is taken advantage of by all her selfish relations. She falls desperately in love with the hero right from the start and would do anything for him, even become his mistress. The hero is that staple of Regencies, the overbearing, domineering male who does precisely what he wants. The plot revolves around the fact that the two of them never talk openly to each other. So… a doormat, a tyrant and the Great Misunderstanding. And yet… it works. It really works. Amazing.

Here’s the premise: Gabriel, the Earl of Sherington, is the little-regarded younger son who was sent away to sea at the age of 10, and proceeded to make his own fortune. Now he’s unexpectedly inherited the title and is busy fending off his obnoxious relations who want him to do everything the way things have always been done. Even his servants gang up on him with a campaign of passive resistance when he fails to fall into line. To prove he’s his own man, and also to spite them all, he sets off for a far-flung estate for some peace and quiet.

On the way to said far-flung estate, he encounters Verity Jolliffe, the doormat, stranded a few miles from home on a journey from one set of obnoxious relations to another (there is an overabundance of obnoxious relations in this book). In possibly the only moment of spirit she shows in the entire story, Verity cadges a lift from the glowering earl. He introduces himself as Sherington, so when he meets her relations, she calls him Mr Sherington, and they’re a bit sniffy about him, not realising he’s an earl. This is an old trick, and it falls a bit flat here because when she later discovers he’s Lord Sherington, she knows all about him and his bad reputation, so why would she not suspect that Mr Sherington might be connected?

Gabriel offers to return Verity to the stage coach stop when she leaves her family to return to London, and somewhere on these two brief encounters he decides that she’s not like the flirtatious and avaricious young women he’s met before, and is docile enough to make an undemanding wife who won’t kick up a fuss over his mistresses and absences from home, or try to change him. But in order to ensure that she stays in line, he decides to make her fall in love with him.

And so the central conceit of the story is born: he devotes almost the entire book to making her fall for him, when in fact she’s been in love with him right from the start. Things are complicated by Verity’s sister and family, with whom she lives in London, who appropriate the earl for themselves and never at any time consider that he might be dropping by so frequently to see Verity. This makes them pretty stupid, of course, but then Gabriel is pretty stupid not to realise that Verity’s panting for him, and she’s pretty stupid not to make it clear. She doesn’t know what he wants from her, but she’s absolutely certain that, whatever it is, she’ll give it to him.

The whole thing is pretty implausible, and yet it’s so beautifully written and so funny that it just rolls along. Naturally, while Gabriel is busy trying to make Verity love him, and getting totally mad when he thinks he’s failing, he’s actually falling in love himself. He’s exactly the sort of arrogant, self-centred character I’d normally hate, yet somehow his fits of rage at his own failures are rather endearing. And the ending, when he finally gets Verity to the church, is a total shock. I should have been outraged, yet somehow the author makes it a triumphant punch-the-air moment.

Apart from the excessive quantity of obnoxious relations, the book captures the Regency feel perfectly, and even my over-sensitive pedant-o-meter only registered a tiny sprinkle of Americanisms. I did laugh at the earl’s stately home being called Sherington Close, though – in Britain a close is a short dead-end street or a narrow back alley, not a suitable name for some vast ancestral home.

An unusual but very effective play on the domineering male meets meek female theme, with some very funny moments and a totally satisfying ending. There’s a bit of lusting, but nothing at all graphic. Five stars.