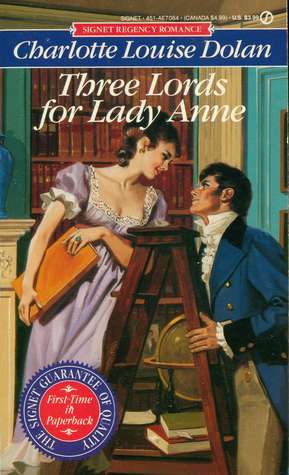 [First published 1991] My second Dolan on the trot, and another oddly original work that ought to have irritated me but actually surprised me at every turn, and very much in a good way. Every time I thought the story was descending into cliche, the author took a sharp turn into new territory.

Here’s the plot: Anne Hemsworth is a governess – yes, it’s that plot. She finds herself dispatched to Devon to take on twin boys who’ve driven away all previous governesses. Yep, still in the time-honoured plot. There’s a rakish ne’er-do-well, who instantly tries to get into Anne’s bed, and there’s the absentee guardian, tall, stern and brooding, who descends unexpectedly… I must have read a dozen or more variations on this one. And then there’s one misunderstanding after another between the two protagonists, so you begin to wonder if they will ever get themselves sorted out, although the instant sizzling attraction between them suggests they will.

Now, if all that sounds yawn-inducingly boring, it’s not at all. For one thing, the misunderstandings are actually very clever and our couple work out what’s actually going on very quickly, simply by logical deduction, so no coincidences or deus ex machina, just the little grey cells. For another thing, the twins are actually very, very ingenious (as they tell Anne themselves!). And for a third thing, she, too, is very clever and is the teacher we all wish we’d had. And for a fourth thing (last one, I promise!), that instant sizzling attraction leads to some deliciously romantic moments. And if I hadn’t promised to stop at four, I would also mention the author’s glorious sense of humour.

The villain of the piece is delightfully inept, even with the aid of his long-suffering valet, and the twins are more than a match for him. The book is light on backstory. We know Anne’s from the start, but hero Bronson’s is only slowly revealed. It makes him rather a sad and lonely figure, but the author handles it with a very light hand.

This reminds me of my major bugbear with the book – the names. I refuse to believe that any man, much less a baron, would be called Bronson, and then there’s Creighton, Gloriana, Collier, Demetrius… Poor Collier, named after a coal miner! I shuddered every time I encountered the poor fellow. But otherwise, the book is a delightful read, and maybe it’s the fact that it was published 30 years ago that makes it so refreshingly different now. Five stars.