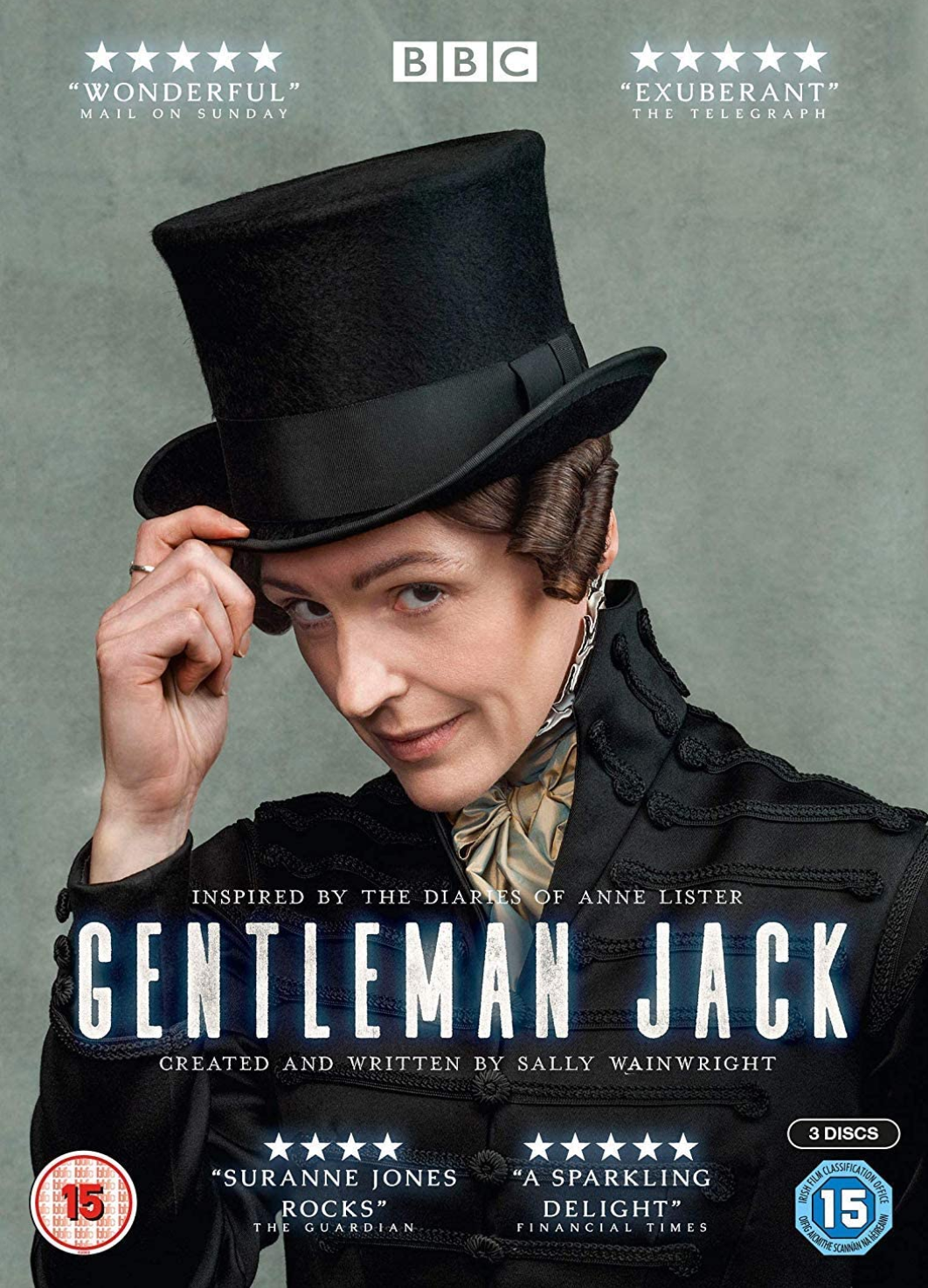 Well, that was awesome. I’ve had the DVD of this for a while, but put off watching it because I wasn’t quite sure what I would find. TV producers do like to spice things up. Happily, they resisted the temptation here, so although there’s a great deal of kissing between our two heroines, there’s nothing here to frighten the horses. But yes, two heroines, so if that’s not your thing, avoid.

The premise here is that Anne Lister, a forty-something and openly woman-loving lady, is the mistress of a run-down estate near Halifax in the north of England in 1832. Her father, aunt and sister all live there, but Anne herself loves to travel to London and the continent, living it up and generally having a wild old time. And affairs. Of the lesbian variety. When her latest squeeze decides to accept a proposal of marriage – to a man! The horror! – Anne returns to her estate, Shibden, to straighten it out while she recovers from her broken heart. And while there she decides to pass the time by making up to the very pretty heiress who lives nearby, Ann Walker.

The major part of the plot follows the burgeoning romance between Anne and Ann, but there are significant subplots involving a coal mining venture and some argy-bargy with villainous local businessmen, some tenants of Anne’s with a drunken father and a sad little romance for Anne’s sister, Marion, but mainly the story is about Anne. Everything revolves around Anne. And this is exactly as it should be, because Anne Lister is one of those towering characters who seems too melodramatic by half, and far too outrageous for the real world, but that’s the glory of this whole tale, because Anne Lister was a real person, and everything shown actually happened to her, as described in her very detailed diary, written in code and only recently decoded.

Suranne Jones is superb in the role of Anne, striding manfully about the place in her almost mannish costume, taking no nonsense from the local bigwigs and being adored by almost everyone else. Except her own sister, the very ordinary, very down-to-earth Marion, who’d really like to get married and have her own life except that she’s constantly overshadowed by big sister. Poor Marion starts off as a bit of a crosspatch, but after her failed attempt to marry the frankly appalling Mr Abbott, one can’t help but pity her. Sophie Rundle is brilliant, too, as the poor-little-rich-girl Ann Walker, hounded by her relations who all want her to get married and stop being a bother. She’s a terrible ditherer and borderline bonkers, but Anne is very good for her and it’s possible to see them having a happy, or at least not too tempestuous, relationship long term.

Pretty much everyone else is from British Central Casting, which means perfect character acting at every level of the cast. Although I confess it was a bit disconcerting to see Peter Davison (Doctor Who!) in a costume drama of this type.

A word of admiration for the set and costume designers, who got everything brilliantly right. Of course it helped that they could film at the actual Shibden Hall where Anne and her family lived, but the other houses were just as fitting and the costumes were terrific, especially Suranne Jones’ iconic man-dress with top hat. An honourable mention for the feather-trimmed hat of Anne’s French maid, which took a battering on its various journeys, becoming more and more bedraggled. A lovely touch!

This is a wonderful, vibrant production, with the over-the-top personality of Anne Lister dominating every single scene. A magnificent performance by Suranne Jones. Highly recommended.