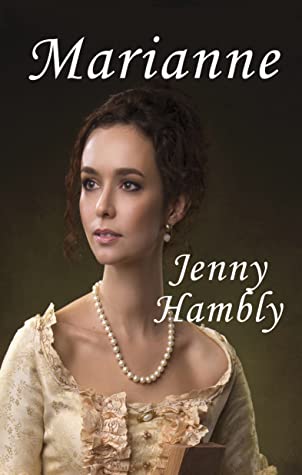 I love a book that ends with such a rousing happy ever after that it puts a silly grin on my face, and this was just such a book. A wonderfully Heyer-esque read with a multitude of entertaining minor characters, a charming romance and plenty of humour, too. What’s not to like?

Here’s the premise: Marianne Montagu and her two friends are leaving Miss Wolfraston’s Seminary for Young Ladies not quite as improved as might be desired. Marianne is a bit too lively for a girl of seventeen soon to make her come-out, Charlotte is a shy soul and Georgianna, an earl’s daughter, is being pushed into marriage with an unappealing man before she’s even enjoyed a season in London. But Marianne’s aunt, Lady Brancaster, wants to take her to the spa town of Cheltenham to take the waters, and as she may bring a friend, Georgianna goes too. Naturally enough, it’s no time at all before Marianne is getting into scrapes, and I loved this line: ‘When Marianne returned to the pump room with a ruined parasol, grass stains on her dress and a cat in her arms, Lady Brancaster began to realise that she might have taken on more than she had bargained for.’

Cheltenham is a refreshing change from Bath, although it has all the usual attractions in a pump room, noxious waters and an assembly room where young ladies might happen to bump into eligible gentlemen. And lo, here comes Lord Cranbourne, also escaping being pushed into marriage and, much to his annoyance, immediately finding himself drawn into one of Marianne’s scrapes. And so the romance begins, with neither of them looking for love, but finding it all the same.

I liked both the main characters. Heyer aficianados will recognise echoes of many of her heroes in Lord Cranbourne, who conforms very much to the jaded, world-weary and selfish man of experience, the dominant type who turns out to be just the right person to have around in a crisis. Marianne is the ingenue, sweet, innocent and very straightforward, who gets into unthinking trouble with the kindest of intentions and is thoroughly mortified afterwards – until the next time! So nothing unusual about them, but nicely drawn, and Marianne at least was never silly as so many very young heroines (especially in Heyer) often are.

There’s a huge cast of supporting characters and a myriad minor sub-plots, which I found rather a lot to keep track of, especially as so many of the characters were titled and I got them muddled up — Lady Brancaster and Lady Bamber, for instance, and Lady Strickland and Lady Silchester. So be prepared to take notes, or else (as I did) spend time paging back and forth to work out who was who. But the little side stories were delightful and added a great deal to the charm of the book, so it’s worth making the effort.

In the end, though, it’s the main romance that steals the show, and the proposal scene is totally awesome, and completely in character. I loved it. Highly recommended reading, and a treat for Heyer fans, who’ll love the writing style and language, the sparkling dialogue and the array of lively minor characters. Five stars.