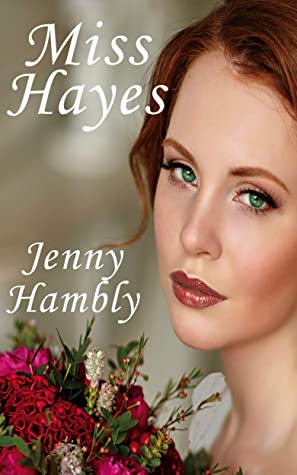 Jenny Hambly has become one of my automatic buys, and I loved the first book in her new series, Marianne, so I was thrilled to discover this follow on. It was a bit of a surprise, however. Marianne introduced three very different pupils at Miss Wolfraston’s Seminary for Young Ladies, and naturally I expected the second book to follow the pattern of the first, and feature another one of the three. And it does, in a way, for here is timid Miss Charlotte Fletcher, venturing outside the Seminary for the first time in years. But accompanying her on this momentous journey is teacher and friend Miss Sarah Hayes, the daughter of a baron who lost all his money, forcing her to leave behind the glamorous world of London society and hide herself away as a teacher. Charlotte would have been a difficult heroine to root for, but luckily it’s lively, somewhat tempestuous Sarah who’s the star of this tale.

Charlotte and Sarah set off from the Seminary to spend the summer with Charlotte’s Aunt Augusta, Lady Carstairs, recently returned from India. Also bound for the Carstairs’ house is Lord Seymore, Charlotte’s guardian and a former admirer of Sarah’s when she was briefly the star of the London season. So the stage is set for the two to rediscover each other, but there’s a whole heap of history to be sorted out first.

For the first few chapters, it seems as if the history is all being dumped on the hapless reader at once, and some of it feels a little disconnected. What was the point of the death of Lord Seymore’s aunt in London, for instance? Apart from delaying him, it seemed to serve no other purpose in the story. Fortunately, after several chapters laden with much backstory, we emerge into sunlight again and the story proper begins.

I was delighted to meet again one of the most charming characters from Marianne, Sir Horace Bamber, a man who might be seen as a brainless buffoon (even his own brother, the local vicar, makes gentle fun of him) but is actually a very kind, gentlemanly man, who emerges from the shadows of minor-character-dom as a rather splendid hero figure. In fact, all the minor characters are well rounded and interesting in their own right. I particularly enjoyed the gloriously eccentric Lady Carstairs and her doting husband.

Never mind that, what about the romance, I hear you say? Well, no worries there. Sarah’s a lovely, sparky heroine, and Lord Seymore’s a suitably heroic sort of hero, a thoroughly pleasant chap. Right from the start, it’s clear these two are made for each other, and our hero, at least, is in the mood for marriage. ‘When the apple is ripe, it will fall’, one of the characters says, and that is just the state Lord Seymore is in. Sarah should be ready to leave behind her dreary life at the Seminary and return to proper society. So what can possibly go wrong? Well, not much, frankly. She’s weighed down by her father’s death and her own reduction in circumstances, and prejudiced against him by his seeming neglect of Charlotte over the years. He’s hampered by the idea of her as a social butterfly, and thinks a quiet country mouse would suit him better. None of this really holds things up much.

In the background there’s an easily-solved mystery which Lord Carstairs, a former judge, sorts out with an aplomb worthy of Hercules Poirot. In addition, Sarah’s bothered by her unpleasant former fiance (who dumped her when her father lost his money, the cad) and there’s some business to do with salt smuggling, which was interesting but didn’t seem to have much to do with anything else.

The resolution of the romance, when it comes, is absolutely delicious, and there’s a sweet romance for shy little Charlotte, too, which was lovely, and a hint that the last of the three friends, Georgianna, will be the star of the next book.

As always, the author writes with assurance and a strong grasp of the Regency era. Fans of Georgette Heyer will find Jenny Hambly a worthy substitute, with sparkling wit, a full complement of strongly-drawn characters and even a sprinkling of Heyer’s traditional phrases. I loved it, and can’t wait for the next in the series. Five stars.