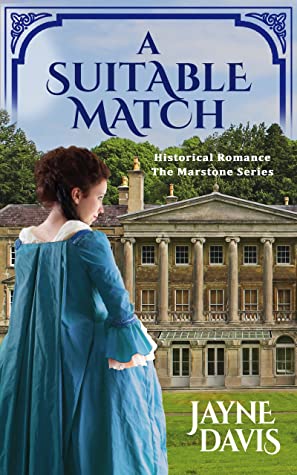 Jayne Davis is an interesting writer. Every book she writes is different, and I love that sense of not knowing what I’m going to get when I fire up the Kindle. Her debut, The Mrs MacKinnons, was sharply original and darkly funny. Sauce For The Gander was a more conventional romance with a strong helping of boy’s own adventure. An Embroidered Spoon had the unusual setting (for a Regency) of Wales, coupled with an uncompromising view of the stifling life of a young woman in the era. And here we are with another switch, a straight-down-the-line tale of the kind that Georgette Heyer fans love – fancy gowns, balls, rides in the park, matchmaking and all the paraphernalia of the London season, with a spying sub-plot. It’s all great fun, and if I slightly miss the out-there originality of The Mrs MacKinnons, this is still better than 99% of Regencies on the market these days.

Here’s the plot: Lady Isabella Stanlake is the youngest daughter of the Earl of Marstone. Her sisters and her brother are all married, so now it’s her turn, and her overbearing father isn’t about to give her any freedom to choose for herself. She’ll marry someone he thinks suitable, and there’s an end to it. Her aunt is bribed to bring her out and make sure she toes the line. Fortunately, Bella is a smart and enterprising young lady, and manages to make the most of her season while avoiding the most hideous of the potential husbands on offer.

Her brother would help her find someone to her liking, as he did for her older sisters, but he’s called away on secret business and so he asks his friend, Nick Carterton, to keep an eye on Bella and help her out if she gets into trouble. Nick is dutifully looking for a wife, so he’s doing the season too, and it’s no problem to look after Bella, especially as she turns out to be far more interesting than the terribly dull and worthy young ladies he’s picked out as possible brides. Nick didn’t light any fires for me, but he’s a steady and honourable young man, and if that sounds ever so slightly dull, it also makes him a more realistic hero than most found in modern Regencies.

Alongside the main story were a number of side plots involving spying, blackmail and a man in disguise, plus an intriguing glimpse of the unpleasanter side of Regency life, involving a seamstress who loses her job. Kind-hearted Isabella sweeps in to rescue her, in the process discovering just how difficult life can be for those at the bottom of society. This sort of story teeters on the edge of imposing modern sensibilities on the world of two hundred years ago, but Davis manages to make Isabella’s benevolence believable. Bella’s extremely sheltered upbringing, bordering on imprisonment, means that she has an unsullied if naive approach to the sophisticated world she now finds herself in, and her intelligent if slightly wayward personality inevitably leads her into such situations.

The story chugs along very pleasantly until the final stretch, when all sorts of mayhem breaks out and things get quite dramatic. Bella’s efforts to escape her fate were ingenious (I love a resourceful heroine), but I greatly appreciated that the villains are not exactly stupid either. Kudos to the author for avoiding the trap of making things too easy for the heroine. And then there’s a delightfully twisty ending, that took me very much by surprise. Nicely done. A very well-written traditional Regency, and a good four stars.