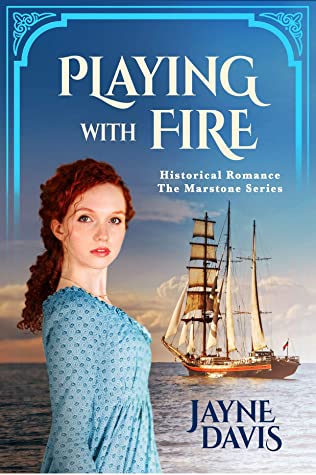 Well, that was awesome. Jayne Davis is my favourite kind of author, partly because I never know what she’s going to come up with next and partly because she allows the story to expand and grow and unfurl its petals in whatever way feels right. So many authors constrain their characters to conform to the needs of the plot, but Davis’s tales always feel completely natural and organic, as if they were always meant to be. This one starts with a tense escape from revolutionary France, morphs into a first London season, complete with visits to the mantua-maker, drives in the park and assorted suitors, veers off into a brilliantly funny piece of trickery worthy of Georgette Heyer, lurches back into tension again and then ends with a delicious romantic denouement. Utterly wonderful.

Here’s the premise: Phoebe Deane is the little-regarded poor relation, living with her aunt and uncle, who are French emigres. When her aunt and cousin decide to return to their chateau to recover some possessions, Phoebe accompanies them, but it’s 1793, the revolution is in full swing, aristocrats are not welcome and Phoebe can’t make her aunt understand the urgency of escaping as quickly as possible. Her aunt’s arrogant manners soon get them into trouble, but they find help from an unlikely source.

Alex Westbrook finds himself drawn to help the family, even though it might hamper his own secret mission in France. But he finds that Phoebe is quick-witted and resourceful enough to be a trusted ally, and more than willing to take risks when necessary. So begins an unlikely friendship, but can it ever be anything more? Well, we can guess the answer to that, but there’s a long and winding road to reach it.

I confess that for the first few chapters, I wasn’t sure I was going to like this book. The difficulties in France are so intense and so relentless, that it almost felt like Game of Thrones. What horrible event was coming next? Even though I knew that the protagonists would survive (because romance) it was a little too intense for comfort. However, once Phoebe reached London and dived into the more familiar ground of preparations for the season, it was a lot more comfortable. Phoebe’s a fantastic character – smart and plucky, with a ton of initiative. Sometimes she seemed almost too smart, and a bit too lucky, but that was OK. Alex – well, who could not like Alex? A great hero, who risks everything to save the mysterious redhead, and treats her like a real person not a helpless female who needs a man to tell her what to do and to protect her.

Of the side-characters, some we’ve seen before (this is the third book in the Marstone series), although it’s not necessary to have read them all. I very much like that the three books are spread out over about twenty years, so this one acts as an extended epilogue to the earlier books, for those who enjoy such catchups. The new characters tended to fall into the helpful yokels or villainous villains categories, although some were just plain irritating (Comtesse de Calvac, I’m looking at you). Phoebe’s uncle, the Comte, who had been distant and uninterested before, suddenly and implausibly becomes a sort of fairy-goduncle to Phoebe, and naturally the dowdy poor relation instantly becomes an attractive and desirable potential bride. This was great fun.

But of course, things soon go pear-shaped and we’re off into all sorts of unexpected twists and turns, and all the time the romance is simmering on the back burner, never ever forgotten and gradually coming to the fore. The ending is lovely and perfectly in keeping with the various characters involved, and if some things seemed unnecessarily convoluted, it was all too much fun to quibble over. The only slight complaint I have is that towards the end, some of the dramatic events happen off-screen. I would like to have seen them up close. But it’s a trivial point.

A wonderful read, whether you like thriller-type tension, something more traditional or a quirky mixture – this book has it all! Not to mention a lovely romance, with some swoon-worthy kisses (and nothing more than that). As always with this author, the writing is top-notch with an effortless evocation of the era, in both England and France. Five stars.

2 responses to “Review: Playing With Fire by Jayne Davis”