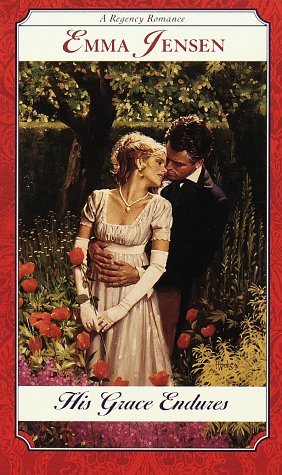 This was a very strange read for me. The plot had so much potential, and yet somehow the author never quite seemed to make things flow smoothly. Or maybe it’s just the odd way the characters behaved, with endless talking but no action, that felt out of kilter. I don’t know.

Here’s the premise: seven years earlier, Deirdre had walked out on her betrothed literally at the altar, and run off to Scotland with his charming friend. Now her soldier husband is dead, and Deirdre has to re-enter society to bring out her husband’s sister. Inevitably she’s going to meet the man she jilted, who is now the powerful Duke of Conovar. Oh yes, and she blames him for her husband’s death. Now, this is all promising stuff, and the early meetings between the two are very tense. He’s surprisingly gracious. She’s surprisingly calm. They try to keep apart and it seems as if that will prevent any explosions of anger or resentment.

But gradually the swirl of rumour and curiosity surrounding them grows, aided by a painting of Deirdre executed by Raeburn (a famous Scottish portraitist), portraying her as the tragic heroine Deirdre of the Sorrows, an Irish tale. Suddenly, Deirdre shifts from being a disgraced jilt to a victim evoking society’s sympathy and Lucas the stiff-necked duke is no longer the dupe but the wicked villain. Things come to a head when they both get drunk and meet at a ball, resulting in a massive outbreak of hostilities. I have to say, this scene is probably the most over-the-top argument I’ve ever read, conducted in full view of half the guests and involving a great many family secrets, holding nothing back.

Naturally for a book of this era (first published 1998), the romantic difficulties are smoothed away only in the last few pages, but before that we get an inordinate amount of back and forth, as Deirdre veers about between overt hostility and something approaching sympathy. I had quite a lot of sympathy for the duke myself, because whenever he manages to inch himself closer to Deirdre she cold-shoulders him again, and starts pouring out her resentment once more. And the poor chap has been in love with her all the time!

But then he’s partly to blame for his own troubles, for no matter how honestly she expresses her dislike to him, he never quite manages to put his own feelings into words, or actions. He simply takes everything she and society throw at him. His Grace endures, indeed. At one point (that monstrous ball scene) she screams at him to show a bit of emotion for once, and I almost punched the air in glee. Yes! Maybe he’ll simply sweep her into his manly arms and kiss her. But no, we weren’t even two thirds of the way through the book so there was no chance.

This is not to suggest that I didn’t enjoy the book. I did, quite a lot, and the little side romance for the sister-in-law, who was unpromisingly immature at the start, was actually rather splendid. The Regency atmosphere was well drawn and there were very few Americanisms, the story intrigued me greatly and I read it pretty much straight through. There’s some lusting and discussion of sex, but nothing on-screen more graphic than a passionate kiss or two. A very readable story, only marred for me by too little actual emotion and too much conversational angsting. Four stars.