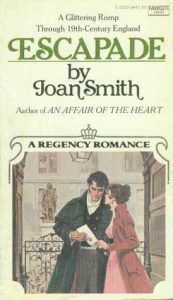 After a couple of reads that just didn’t do it for me, I was relieved to come back to Joan Smith for this delightfully frothy traditional Regency. It’s very old school, of course, being over 40 years old now, but that just emphasises how far tastes have shifted. There’s no existential angst or any of those new-fangled feminist opinions that modern heroines are so fond of. No, this is all about the season and Almack’s and the proper pursuit of every respectable young lady, which is Finding Oneself A Suitable Husband.
Here’s the premise: Ella Fairmont is no longer a debutante, but her aunt hasn’t given up hope, so here she is indulging in another round of London’s Marriage Mart. To make the exercise more palatable, Ella amuses herself by retailing all the society gossip in a snippy little newspaper column, where she poses as ‘Miss Prattle’. The principal object of her vitriolic pen is Patrick, Duke of Clare (although we’re never given a reason why she dislikes him so much). But then the Duke invites Ella and her Aunt Sara to a house party at his country residence in Dorset…

I’ve read a similar tale more than once before, but even if I hadn’t, it would be easy enough to see how things are going to go, and it’s true that there are few surprises. But that’s not what a book like this is all about. If you want shocking twists, go and read a thriller. With a Regency, it’s all about the journey, not the destination, and the journey here is delightful.

First of all, there are a whole array of very silly side characters. The Duke, foolish man, has invited along three of the leading contenders for his hand, for he happens to be one of the most eligible bachelors in the kingdom. Lady Honor is the high-ranking one, without a word to say for herself, utterly confident that the duke is hers by right. Miss Sheridan is the beautiful one, who can think of nothing but her appearance. And Miss Prentiss is the one with a multitude of accomplishments, none of which she has much aptitude for. There are three male friends, too, to make up the numbers and squabble gently over the ladies’ hands, but they blurred together in my mind and I can’t even remember their names.

An honourable mention must go to the duke’s mother, a lovely, sensible lady who’s entirely supportive of her son, and completely different from the usual trope of the harridan dowager duchess. Then there’s Aunt Sara, who’s a bit of a live wire and has some of the best lines in the book.

But the starring roles go to Ella and Patrick, who start off deep in indifference, start to discover that the other is actually more interesting that they’d suspected and needless to say, end up very much in love. Given the date of the book, this is a fairly restrained affair, devoid of real passion, and mostly their growing interest manifests itself in the rising level of banter between them. They are soon on first-name terms, and arousing a certain amount of jealousy in the others.

The duke’s journey to love is steady and rather touching. Once his interest is piqued, he turns his attention on Ella and singles her out very conspicuously. For some reason, never properly explained, everyone assumes he’s just stringing her along, or flirting, or otherwise just amusing himself, but since he doesn’t have a reputation as a rake, it’s hard to see why they would think that. And towards the end, when she seems to blow hot and cold, he pursues her quite determinedly and charmingly.

Ella, however, is harder to fathom. Why did she dislike him so determinedly at first, enough to make him the principal recipient of all her most acid comments in the gossip column? Why, when she starts to realise that he’s actually not as bad as she’d thought, does she not ease off a bit? And why, why why, when she’s written something completely wrong and malicious about him, doesn’t she do the sensible thing and confess? I do get a bit cross with heroines (and heroes) who just refuse to talk things through. And another why – why, for the love of mike, when he proposes to her, albeit in a completely wacky way, doesn’t she at least wonder if he might be serious? And again, talk to the poor man. Give him a chance to explain himself. But I suppose if all heroes and heroines were sensible, rational beings, their stories would be about 20 pages long.

Now if this was all, this would be just another light-hearted Regency romance, nothing special. Fortunately, after a slightly sluggish start, it kicks into a glorious high gear of comedy. The banter between Patrick and Ella is sparkling, with just an edge of hostility, but there’s also a lot of fun in the house party itself, when Ella comes up with some outrageous schemes for the guests to entertain themselves, although I won’t spoil the surprise by telling you what they are.

Needless to say, there are some hiccups on the road to true love, resolved in the last few pages by the hero sweeping the heroine into his manly arms for a thorough kissing. I strongly disapproved of his arrogance (he never for one moment doubts that she’ll marry him) and I wanted him to grovel just a little bit to win her over, but that was very much the norm for that era.

A beautifully written book, with a few very minor historical errors that only extreme pedants like me would even notice, with a charming hero, a spirited and intelligent heroine and a shed-load of laugh-out-loud humour. I loved it. Five stars.