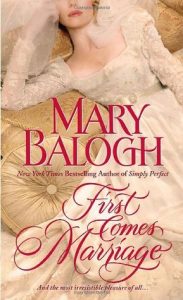 Mary Balogh is capable of spinning a brilliant tale out of almost nothing, and so it is here. It’s a basic marriage of convenience plot, with very few stumbling blocks on the way to the happy ever after, but it’s beautifully done.

Here’s the premise: Elliott Wallace, Viscount Lyngate, arrives in the tiny village of Throckbridge to upend the lives of one of its residents, seventeen-year-old Stephen Huxtable, by telling him he is the new Earl of Merton. Elliott thinks he’ll just whisk the boy off to be trained up to his new position, but Stephen has three older sisters who are not about to be left behind.

Now Elliott has the problem of introducing all four of them into society, and how is he to manage the sisters? He has no females in his own family in a position to do it. But he’s been thinking he ought to marry soon anyway. Maybe he should marry one of the Huxtable girls, and solve two problems at once? He sets his sights on Margaret, the eldest, but middle sister Vanessa, a widow, intervenes to save her sister from a loveless marriage.

Does this sound familiar? It will if you’ve ever read Georgette Heyer’s The Convenient Marriage, where the youngest sister jumps in to protect her older sisters from a similarly loveless match. In that book, the prospective bridegroom, Lord Rule, is intrigued enough by the girl’s audacity to do it, but Elliott has (supposedly) disliked Vanessa from the start, so I was very intrigued to see how she would persuade him. It’s a note-perfect scene, beautifully written.

From then on, the story proceeds on the traditional rails, and in fact, almost nothing happens at all. The four Huxtables adapt beautifully to their new life, are accepted without a qualm into the high society world of the London season, and make no social faux pas. This is a story with absolutely no surprises. It’s the way the main characters deal with the non-surprises that makes this book such a joy. Not so much Elliott, who is a fairly typical example of a buttoned-up, arrogant bloke, who’s not willing to sit down and talk things through. He’s a real grumpy-drawers, who’d far rather sulk than find a way to solve a problem. But Vanessa – oh, Vanessa is a glorious character. She’s a totally straightforward and outspoken person, and she’s not about to let her chance of happiness trickle away by letting a problem fester. No, she sets out to confront Elliott and draw him out of the shell he’s been building around himself.

The side characters fade into the background as the story progresses, no doubt ready to spring up, fully formed, for their role in a future book of the series. Sisters Margaret and Katherine, brother Stephen and cousin Con will all get their turn in the spotlight. But this book is thoroughly about Vanessa and Elliott, and their marriage (and yes, there’s a fair amount of sex in it). A wonderful read. Five stars.